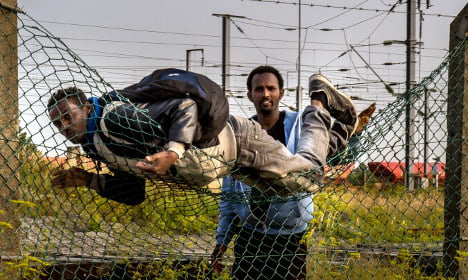 A migrant climbs over a fence in Coquelles, near Calais northern France, to get to the railway tracks that head to the Eurotunnel terminal. Photo: Philippe Huguen/AFP

The meeting, to be followed by further talks in Berlin, will pave the way for broader discussions at an EU summit in Malta in November which will also be attended by African leaders, Cazeneuve said after talks with his German counterpart Thomas de Maiziere in the German capital.

De Maiziere said it was “unacceptable that European institutions continue to work at their current slow pace” in finding a joint solution to the crisis, adding that “too little” was being done to implement decisions that have already been taken.

EU border agency Frontex reported on Tuesday that a record 107,000 migrants were massed at the bloc's borders last month, as the continent faces its biggest migration crisis since World War II.

De Maiziere said he hoped new centres set up to determine whether new arrivals are refugees fleeing war, or economic migrants simply looking for work, would be operational by the end of the year in Greece and Italy, the countries bearing the brunt of the crisis.

Cazeneuve, meanwhile, called for a “harmonisation” of asylum laws in Europe and the creation of “a list of safe countries of origin at the European level” to make it easier to send home asylum-seekers whose countries are considered at peace.

He also urged a “deepening of cooperation among police and intelligence services” along the lines of a deal agreed Thursday between France and Britain to combat people smuggling at Calais.

European leaders are expected to use the Malta summit to encourage their African counterparts to do more to stem the flow of migrants heading across the Mediterranean in rickety boats in search of a better life in Europe.

They will also seek assurances that African countries will actually implement agreements signed with European countries to take back migrants who have been denied leave to remain in the EU.

De Maiziere expressed hope that the European Commission will be able to move forward with agreements allowing rejected asylum-seekers to return to their home countries “without fear of persecution”.

Cazeneuve added that this will require “discussions with the countries of origin”.

The two foreign ministers also discussed Ukraine, Cazeneuve said, adding that they prepared new initiatives on the conflict that will be presented to European institutions.

The leaders of France, Germany, Russia and Ukraine held telephone discussions Thursday, with all sides calling for the full implementation of a ceasefire deal, according to the French presidency.