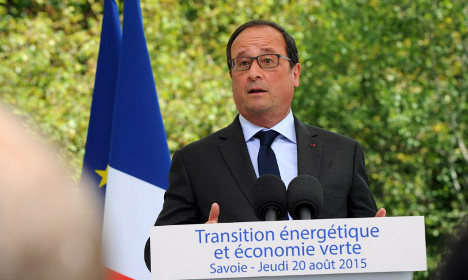 President Francois Hollande. Photo: AFP
France is hosting the next UN meeting on climate change from November 30 to December 11, aimed at reaching a post-2020 deal to save Earth's climate from potentially catastrophic damage from fossil-fuel emissions.
The target is to limit warming to no more than 2C (3.6F) over pre-industrial levels, and the pact would commit the world community to rolling back emissions and muster financial help for poor countries threatened by worsening droughts, floods and rising seas.
Failure to reach a deal would be a “disaster”, he told reporters after a visit to the National Institute of Solar Energy in eastern France
“If there is an agreement on climate, it won't only be a deal on rules, mechanisms, it will also be a deal on financing, because many emerging or vulnerable countries have asked that their energy transition be give financing, and rightly so,” he said.
One of the many issues that will be discussed at the Conference of Parties in Paris — which will be attended by representatives of 195 countries — will be how to share efforts to rein in global warming between industrialised and developing countries.
Developing economies, for instance, are looking at rich countries to explain how they will implement their promise of mustering $100 billion (€90 billion) a year in climate finance by 2020.
But the upcoming gathering is scarred by memories of the last time the UN tried to forge an ambitious climate deal — the 2009 summit in Copenhagen that ended in deadlock.”