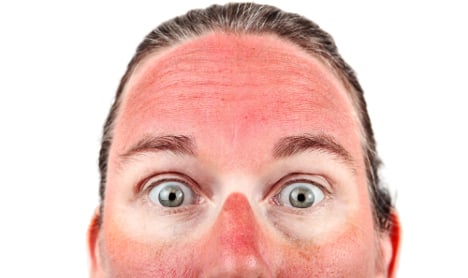 If you want to blend in, then get some decent sun block. Photo: Shutterstock

French beaches are normally at their emptiest around midday. Why? Because that’s when the sun’s rays are at their strongest – and most dangerous. Midday also happens to be the all-important hour leading up to the biggest meal of the day. But if you do venture on a beach around noon, don’t forget to slap on the sunscreen. After all, how many tomato-coloured French beach belles have you seen lately? 2. Don’t drink on the beach

Downing cans of lager on the beach is a sure way to stick out as a foreigner – and attract disapproving glances from your French fellow beachgoers. Feel like a drink? Any self-respecting Frenchman will go to a beach bar. It’s far more chic. Tip: stick to the rosé, or a decent Sancerre. 3. Don’t get out the picnic hamper

There’s a time and a place for everything. In France, people generally eat around tables or go out for lunch. Even committed beach bunnies happily take two hour off bronzing for a delicious nosh-up with wine. There’s nothing more awkward than a flustered beachgoer trying to master the two-towel trick while changing into a swimsuit. Most people in France, you’ll find, arrive with their bathing suit already on underneath their clothes. Forgot to change? The trick is to do it as effortlessly as possible. And if you do show some flesh, rest assured that no one on the beach will bat an eyelid.

Men: it’s time to get out those budgie-smugglers. While men in the US and UK mostly opt for baggy swimming shorts, a surprising number of French guys turn up at the beach in skimpy Speedos. The reason for this, apart from the aerodynamic effects of lycra, is that they’re often obliged to wear skin-tight bathing costumes in public swimming pools. Apparently, they help keep the water cleaner. Foreigners are often shocked when they see French women sunbathing topless on the beach – in full view of family, friends and strangers. We’re not saying you have to join in – but do try to be open-minded. Having said that, not every stretch of sand amounts to an invitation to strip. If in doubt, it’s a good idea to check out the rules at public beaches or follow the example of your fellow beachgoers. OK, so perhaps this wouldn’t apply so much at places like St Tropez’s Club 55 or the Monte Carlo Beach Club. But, on the whole, you’ll notice that French people aren’t too fussed about revealing less-than-perfect bodies on the beach, where you’ll find young and old in all shapes and sizes. …Just make sure you’re wearing the right swimsuit. A mismatching bikini is a classic French fashion faux-pas. Can’t find a bikini top and bottom with the same pattern? Buy a one-piece instead. And the French should know. After all, they did invent the bikini.