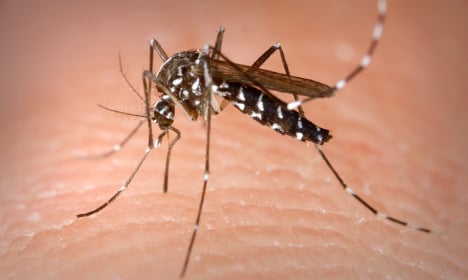 Characterized by its black and white striped legs and body, the tiger mosquito is native to the tropical and subtropical areas of South East Asia. Photo: James Gathany/CDC/Wikicommons

A big anti-mosquito operation was underway in a Paris park on Wednesday evening, after the insects, which can carry deadly diseases including dengue fever and chikungunya, were spotted in the capital.

According to the Interdepartmental Agreement for Mosquito Control (EID), the aim of the operation was to eliminate the adult mosquitoes to stop them from multiplying.

The insects were first spotted at the end of July in the Parc Floral in the city’s 11th arrondissement, then a few days later a few kilometres away in some allotments in Crétail, south east of Paris.

The alarm was raised by passers-by who reported the insects via a special website set up by the Ministry of Health.

“The tiger mosquito was spotted from time to time last year in Paris, in Val-de-Marne, Seine-et-Marne and in Seine-Saint-Denis,” Grégory L’Ambert, entomologist at the EID, told Le Parisien.

“But there was no implantation. This time the situation is different: we have found larvae.”

“The implantation is recent and therefore very moderate. It is located at the edge of three humid spots which are very far from any houses,” Paris Town Hall told the paper.

Characterized by its black and white striped legs and body, the tiger mosquito is native to the tropical and subtropical areas of South East Asia. However, the species is increasingly found in other countries around the world through international travel and the transport of goods.