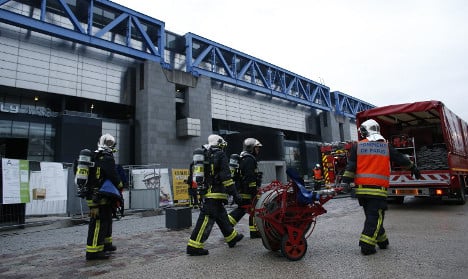 Firefighters battled the blaze all through the early hours of the morning. Photo: AFP
Around 30 fire trucks and 120 firefighters were sent to tackle the blaze, which broke out before dawn in an empty building that was being decorated. At around 7:30am the blaze was under control.
Smoke and flames damaged an area of 10,000 square metres (107,000 square feet), ravaging a €110-million ($122 million) scheme to turn the building into an area for shops.
The fire alarm system was not operational because of the work, spokesperson Gabriel Plus told AFP.
The Local was at the scene late on Thursday morning, where there were still dozens of fire trucks outside the building.
“We are all very upset,” a staff member at the museum told The Local. “We don't know the exact extent of the damage yet… but we know the our newest exhibition has been hit. We just don't know how bad yet.”
However the fire brigade later confirmed that there was no damage to museum exhibits.

120 firefighters were sent to tackle blaze at Cité des sciences. Many still here at 10am https://t.co/aIo29C1HTu

Two fire fighters were treated after being overcome by intense heat.
The heat was so fierce that firefighting teams were only able to work for 20 minutes at a time before having to be rotated.  Around 50 firefighters remained on the scene by late morning.

Rain showers a welcome relief for these firefighters in Paris, who've been working all night at the Cité des Sciences pic.twitter.com/6o8TXSZwb7

Meanwhile, tourist families who continued to arrive on Thursday morning were turned away from the museum.
A father of two from Italy who is on holiday in Paris, had bought tickets in advance for him and his family.
“It's a shame… we were planning a family day at the museum and the kids were excited,” he told The Local.
“It's not going to happen now at all because we are heading home today. I can only fill in these refund forms they've given me and hope I get my money back.”
The cause of the blaze is not yet known. The Cite des Sciences is more a science learning centre for the general public than a traditional museum.
Located in northeastern Paris in the Parc de Villette, a redevelopment on the site of the city's former slaughterhouses, the complex draws around five million people a year.
The museum comprises four huge cube-shaped buildings. The fire occurred in a 10,000-square metre (107,000-square-feet) cube that was being fitted out for shops, and was due to open on October 15th.