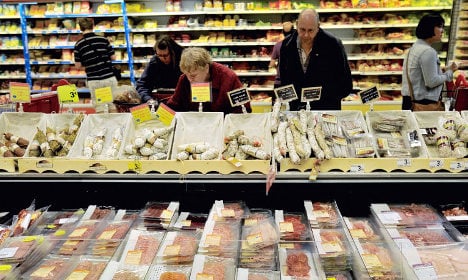 Consumerrs chooses products at the delicatessen section in an Auchan supermarket. Photo: AFP
Russia's consumer watchdog Rospotrebnadzor has been “conducting planned comprehensive checks across the entire chain of Auchan stores in Moscow since mid-June,” the watchdog's chief Anna Popova told Russian news agencies.
Popova said the results would be released once the inspections are completed, without specifying when that would be.
Auchan — a leader on the Russian market with 88 locations across the country — has increasingly found itself in the crosshairs of Russian
authorities.
Rospotrebnadzor accused the supermarket chain at the start of August of a string of quality control infractions at its stores in the Moscow and Tula regions.
The agency criticised Auchan for breaches over food disposal, expiry dates on perishables and meat products containing other animal matter.
Auchan has contested the allegations, based on DNA analyses, and announced an internal investigation.
Russia's consumer watchdog has often been accused of using health grounds as a pretext for business or political manoeuvring, particularly in times of diplomatic tensions.
But the agency insisted that the latest round of checks on Auchan had been planned since 2014 and had nothing to do with politics.
“The checks are happening outside any other context and were initially supposed to be carried out in 2014,” the agency's press office told RIA Novosti agency.