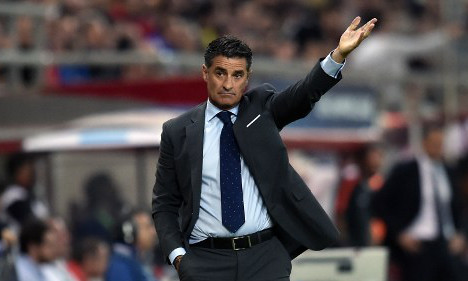 Spanish coach Michel will be at the helm for Marseille. Photo: AFP
“It is official. Jose Miguel Gonzalez del Campo is the coach of OM,” Marseille announced on their Twitter feed with a picture of Michel holding an OM shirt alongside president Vincent Labrune.
Michel had been seen earlier on Wednesday in discussions with Labrune and other members of the club's hierarchy.
Marseille did not confirm the length of the deal agreed with the former Spanish international winger, who won 66 caps, but local newspaper La Provence reported that he could sign a two-year deal at the Stade Velodrome.

Michel was a star in the great Real Madrid team of the late 1980s and early 1990s. As a coach, he worked at Rayo Vallecano and took charge of the Real Madrid B team before leading Getafe to a best-ever sixth place in 2010.
He had a disappointing spell at Sevilla but had a successful stint at Olympiakos, winning two Greek titles and a Greek Cup before being sacked
earlier this year.
Marseille have endured a difficult start to the new season, losing their opening two matches 1-0.
Bielsa resigned immediately after the defeat to Caen on the opening weekend of the season, with his assistant Franck Passi taking charge for the loss at Reims last Sunday.
Url copied to clipboard!