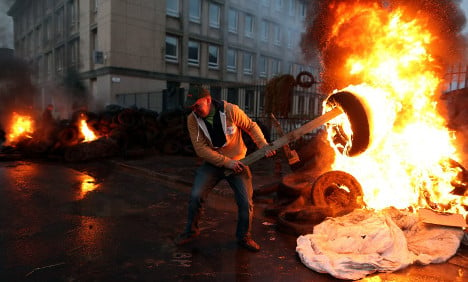 A man prepares to throw an burning tire as farmers protest in front of the prefecture early on August 19, 2015 in Saint-Lo, northwestern France. Photo: AFP

The striking farmers began their protest in the town of Saint-Lo at 6am on Wednesday morning, driving through the streets in their tractors and honking their horns.

Around 150 of them gathered in front of the local prefecture to burn tyres, straw, and to dump 30,000 litres of liquid manure, reported Le Parisien.

They also tried to break through the front gates of the prefecture. (Manure was dumped on the streets of Saint-Lo. Photo: AFP)

Armed riot police were called to the scene, and were forced to use tear gas to disperse the crowds.

Strikers said that France's produce prices were “too weak to live off”.
“Things absolutely haven't improved for the livestock sector, even despite government promises,” the president of the FDSEA union, Sebastien Amand, told the paper.
By 7.30am, the farmers had left the scene. Firefighters were left to extinguish the fires and clean the area.
Farmers have been protesting across the country this summer, claiming that falling prices and changes in the nation's dietary habits are threatening their livelihoods.

An opinion poll published earlier this month revealed that 86 percent of French people support the protests of the farmers, who have been blocking highways and access to tourist attractions in their bid to be heard.

Only five percent of the population believe the radical protests by farmers were “unjustified”.