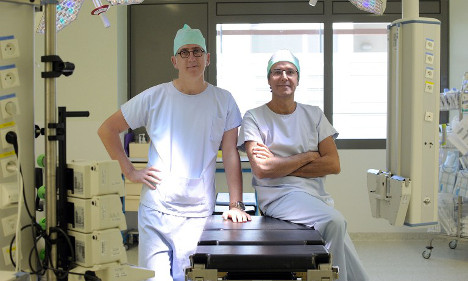 Doctor Nicolas Doumerc, left, and Federico Sallusto, right, from the Toulouse University Hospital. Photo: AFP
The procedure at the University Hospital Centre in Toulouse was executed “in a single go, exclusively with robots,” the lead surgeon, Frederico Sallustro, told AFP.
In addition, the kidney was both removed and transplanted through the vagina rather than via an incision, the standard method, the hospital said in a press release.
Valerie Perez, 44, gave one of her kidneys to her 43-year-old sister Beatrice Perez on July 9th, with both of them in the operating theatre at the same time.
“The two sisters are doing well,” said Sallustro, who was assisted in the operation by medical robotics expert Nicolas Doumerc.
The donor was back at home the day after the surgery, while her sister stayed on in hospital another three days.
About a hundred people — notably in India, the United States and France — have benefited from robotic kidney transplants in the last couple of years, according to the hospital.
Sallustro and Doumerc first combined this high-tech method with a transplant to the recipient via the vagina in May. The donor in that case,
however, was a man.
With the sisters, the surgical team decided to add a further innovation by completing both parts of the procedure — removal and insertion — one
immediately after the other.
“I have been dreaming of doing this operation for the last three years,” Sallustro said, describing it as a “major step forward.”