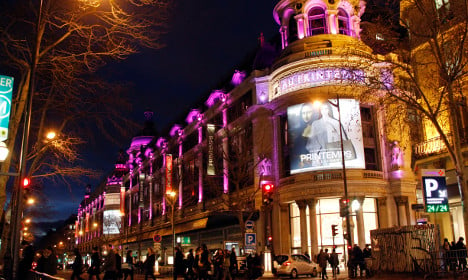 The Printemps department store in Paris, which falls within one of the so-called "International Tourist Zones". Photo: Ludovic Martin/AFP

Paris may soon be worthy of New York’s title of the city that never sleeps as the Ministry of Finance adds the finishing touches to a decree allowing shops in certain areas of Paris to stay open until midnight and on Sundays.

The decree, which forms part of the controversial Macron law, adopted by parliament in July, could come into force by the beginning of the school term, Le Parisien reported.

Controversially, it also includes some less obvious additions, including Beaugrenelle, a new shopping centre in the 15th arrondissement, and the shopping area in Olympiades, in the 13th arrondissement. “Their zoning was defined after a very detailed analysis of all the routes of the 32 million tourists who come to Paris each year,” a person close to the ministry was quoted as saying.

“The shopping centre at Beaugrenelle? It’s close to the Eiffel tower and one of the biggest hotels in Paris. The Italie 2 centre and the Olympiades shopping area? It’s a way to visit Paris’s Chinatown, which is very popular with tourists.”

The decree also includes areas of Cannes and Nices in the south-western Alpes-Maritimes département, as well as Deauville in the Calvados département of north-western France.

The decree has now been sent for approval to local elected officials, unions and professional organizations.

The Macron law, which aims to liberalize certain sections of France’s highly-regulated economy, is the brainchild of Economy Minister Emmanuel Macron, a former banker.

The government sees it as vital to pep up the moribund economy, the second biggest in the Eurozone.

The package is also viewed as crucial in Brussels, where the EU has urged France to reform in order to bring down its ballooning budget deficit, which is far above European limits.