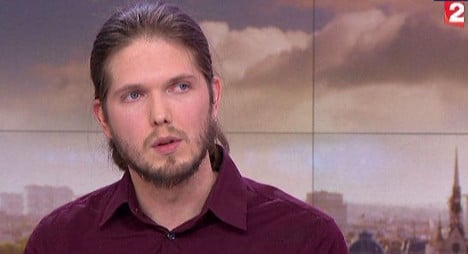 Lilian Lepère was stuck for over 8 hours in a cupboard during the hostage drama. Photo: France 2
Lilian Lepère was one of the lucky survivors from the Paris terror attacks that left 17 dead in January. He hid in a canteen closet for over eight hours while the Kouachi brothers – who had just shot 12 people dead at the offices of Charlie Hebdo – took over the printing business where he was employed.
During the hostage drama, Lepère texted vital information to the police, giving them information about the building and the actions of the two Kouachi brothers.
Read Lepère's chilling account of events here
But now that the dust has long settled, Lepère is taking legal action against French radio station RMC and the television channels France 2 and TF1, Le Parisien revealed on Tuesday.
Why? Because they broadcast the fact that an employee was thought to be inside the building while the hostage situation was ongoing. This put Lepère's life directly in danger, his lawyer claims, considering the two terrorists had mobile phones and radios and were able to listen in to the media reports about themselves.
The RMC channel interviewed a local politician during the drama who revealed that a member of staff was hidden inside the factory, which was later confirmed by Lepère's sister after being probed by a journalist on France 2.
“We stopped calling him because if he is hiding or something then it could disrupt things,” she said at the time.
A reporter at TF1 spoke of the possibility of an employee being hidden inside around the same time.
Lepère himself actually appeared on France 2 just a few days after the attacks to give a detailed account of his ordeal, explaining how at one point a gunman was just fifty centimetres from the cupboard in which he was hiding.
Hostages who were caught up in the other terror drama in eastern Paris during the same attack have also taken legal action against French media. In April, six people who hid in a supermarket refrigerator during the siege said that several channels “lacked the most basic precautions” after broadcasting their location live during the siege.
The lawyer representing the group, Patrick Klugman, singled out French 24-hour news channel BFMTV, which revealed live on air that the group — including a three-year-old child and a one-month-old baby — was hiding from the gunman in the cold room, where they were taken by one of the supermarket's employees.
“The working methods of media in real time in this type of situation were tantamount to goading someone to commit a crime,” Klugman told AFP at the time, roundly criticizing coverage by other outlets of security forces movements during the standoff.
The maximum penalty for media that endangers the lives of others by deliberately ignoring security protocols is a year in prison and €15,000 ($16,300) fine.
In February France's major TV and radio networks were formally rapped by the French broadcast regulator, the Conseil Superieur de l'Audiovisuel (CSA), for what it considered to be serious “breaches” in their coverage of the terror attacks.
The warnings were issued for violations including: showing the moment two of the Islamist gunmen cold-bloodedly shot dead a policeman; identifying the two gunmen before police did so publicly; reporting that people were hiding in a Jewish supermarket taken over by a third gunmen; and providing live video feeds of the deadly police assault on the supermarket.
The broadcast regulator determined that 36 breaches of broadcast rules had been committed, to different degrees of gravity, by state channels France 24, France 2, France 3, France 5, France Info, France Inter and RFI as well as commercial broadcasters TF1, LCI, Euronews, Canal+, BFMTV, iTele, Europe 1, RMC and RTL.