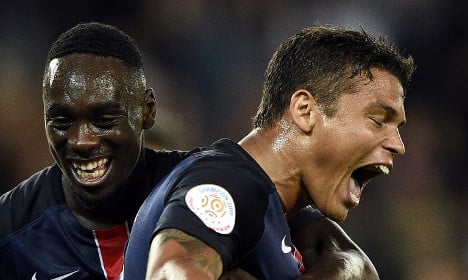 PSG's Brazilian defender Thiago Silva celebrates after a goal on Sunday. Photo: AFP
A stunning Blaise Matuidi strike and a Thiago Silva header, both in the first half, put PSG out of sight against newly-promoted Gazelec at the Parc des Princes and left Laurent Blanc's side with six points from a possible six at the start of the new campaign.
“It was a good evening. The match could have been a bit more spectacular if we had taken a couple more chances but their 'keeper made several very good saves,” acknowledged Blanc.
Argentina winger Angel di Maria, the €63 million (£44.3m; $68.9m) signing from Manchester United, was introduced to the Paris fans before kick-off, although he was not yet fit enough to make his debut.
And with Zlatan Ibrahimovic again sidelined, PSG were not at full strength, as 18-year-old forward Jean-Kevin Augustin was handed a first start in the top flight.
But this was always likely to be a trying night for Gazelec, a club whose overall budget for their debut season at the top level barely equates to Ibrahimovic's annual salary at the Parc des Princes.
It always seemed a question of when, not if, Paris would open the scoring and they duly did so in the 11th minute thanks to Matuidi, the France
midfielder taking the ball into the box and then sending a fizzing left-foot drive high into the net at the near post.
PSG added their second goal midway through the first half, captain Silva putting the disappointment of being dropped from the Brazil squad last week behind him as he headed home a Thiago Motta corner.
At that point it looked like turning into a rout, but Edinson Cavani failed to convert several openings in the second half and Serge Aurier headed a great chance wide.
David Luiz was denied by a brilliant Clement Maury save as the hosts settled for a win that leaves them, ominously, already in top spot on goal
difference.
Gazelec are still looking for their first top-flight goal, but their coach Thierry Laurey said: “We knew it would be complicated, but we kept fighting after losing the goals. Luckily for us there are not 19 teams like PSG in this league.”
Managerless OM reeling
Earlier, Marseille slumped to a second defeat in as many games, a first-half strike by Hamari Traore giving Reims all three points in a 1-0 win
in Champagne country.
Marseille, still reeling from the shock resignation of coach Marcelo Bielsa following their opening 1-0 defeat to Caen, never really looked like scoring and find themselves in the relegation zone in the fledgling standings.
Bielsa's former assistant Franck Passi took charge of the away side in Reims but he insisted the Argentine's departure could not be used as an excuse for a disappointing display.
“We have to stop talking about trauma! We've put last weekend (Bielsa's resignation) behind us,” said Passi.
“We mustn't hide behind that excuse. But it's clear that it will not be easy and it will take time to find a solution.”
In contrast to OM, it has been a great start to the season for Reims, who had already beaten Bordeaux on the opening weekend.
Sunday's other match saw Lorient scramble a 1-1 draw at home to Bastia thanks to a stoppage-time Benjamin Moukandjo penalty, which cancelled out
Floyd Ayite's early opener.
Mathieu Valbuena made his Lyon debut in a 1-0 win at Guingamp on Saturday as Claudio Beauvue netted the only goal of the game against his old club.
Rennes and Caen were the weekend's other winners, while Monaco warmed up for their Champions League play-off first leg away to Valencia by drawing 0-0 at home to Lille on Friday.
It was a difficult night for the principality club, who lost influential midfielder Joao Moutinho to an ankle injury that will keep him out for up to six weeks.