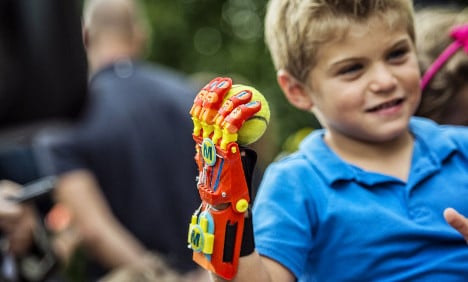 Competition is fierce in France, but on Monday six-year-old Maxence, who was born with no right hand, is set to become the first French person to be fitted with a 3D-printed hand.

The boy will receive the hand thanks to Enabling the Future, an American charity formed by engineers, makers, designers, artists and children, which creates low-cost prosthetic limbs for children around the world.

“Since 2013, we have delivered around 2,000 hands to 37 countries, especially for children, but also for amputated adults in developing countries,” Jon Schull, the creator of the charity said, according to Le Point. Depending on the size of the hand, a 3D-printed prosthetic hand can cost between €50 to €200, meaning they are affordable and replaceable.

Speaking to AFP, the boy’s mother, Virginie Contegal, said: “It’s not at all medical. He won’t have a transplant or an operation.

“Since Maxene was born, we decided not to fit him with an artificial limb. This way he will have a coloured hand in whatever colour he wants, like a superhero (with a big M for SuperMax), which he can take off when he wants.

“It will be fun for him in the playground with his friends.”

According to Alexandre Martel, founder of the site 3Dnatives.com, a total of 144,000 3D printers were sold around the world last year, 20,000 of them in France.