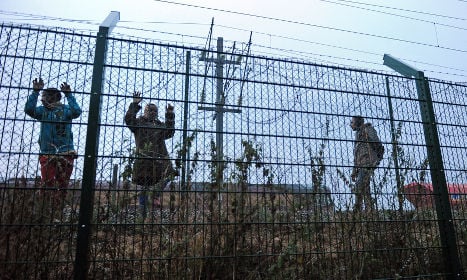 “England would be good, but I'm tired,” said Sadam, a 24-year-old Sudanese migrant who has decided to apply to stay in France.

Like for many other migrants, his decision stemmed more from exasperation than desire.

“It's so hard to get to England,” said Sadam, who has been in France for three months, told the AFP news agency.

Authorities have imposed stricter security measures for ferries and for trucks using the Channel Tunnel, making it more difficult for migrants to get to Britain from Calais.

Waiting for the perfect opportunity to cross over, many of the some 3,000 migrants in the Calais area stay in the “New Jungle”, a makeshift camp several kilometres from the city centre.

Many have family in Britain and can speak English, and the British authorities have been accused of making it too easy for them to work illegally.

Djamal, a young Afghan man, also decided to try his luck in France after attempting to cross the Channel to no avail.

He and three friends, leaning against the counter of one of the many stalls that have sprung up at the camp, said they have tried “every night for a month” to cross the series of barriers and get past the police guarding the Channel Tunnel.

Another friend shows cuts on his arms, legs and torso.

The trek is not only dangerous, but physically taxing. With each futile attempt, the young men must spend another two hours retracing their steps — before trying yet again the next night.

But not all of the migrants want to get to Britain.

Kalim, 28, who serves tea at his informal restaurant in the migrant camp, said he had wanted to stay in France from the start.

He said he understands that the French government “cannot give a home to everyone”.

And for Kalim, the risk of death or injury posed by trying to cross over to Britain was not worth it.

Since the beginning of June, at least 10 people have been killed trying to get through the Channel Tunnel.

Adam, a 26-year-old from Darfur, said his goal had always been to come to France.

“When I arrived in Paris, I saw people (migrants) in the streets without any organised camps, and then I came here to Calais.”

Applying for asylum in France, however, is only the beginning.

“We have to wait six, seven months. They tell us that they'll provide housing, but in the meantime, what can we do?” Djamal said.

But local officials say that the processing of asylum and refugee applications has been expedited, particularly in Calais.

According to the French immigration office, in Calais there are “shorter waiting times than in the rest of the country, and access to housing is a priority”.

But Maya Konforti, of the Migrant Hostel organisation, says that measures introduced by French Interior Minister Bernard Cazeneuve to accelerate the application process have not been very effective.

“Two months ago, they gave papers to 111 Eritreans in 24 hours. But… they did it one Saturday and then it was over,” said Konforti, who is affectionately called “mama” by some of the migrants.

Philippe Wannesson, an activist and writer of a blog on migrants and migrant rights, said the process had in fact sped up: “It's less than six months rather than more.”