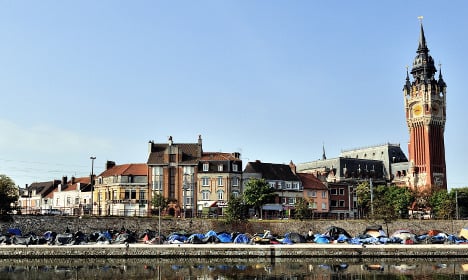 Migrants' tents lined up alongside the water underneath the shadow of the Belfry. Photo: AFP
Calais was once known as a cultural hotspot in northern France, with a five-kilometre beach that beckoned visitors to stay rather than pass through.
Now, tourists are being warned to close their car windows and lock their doors as they drive past.
So what went wrong?
For almost 20 years, the city has increasingly acted as a gateway for thousands of migrants and refugees from all over the world desperate to get across the English Channel to the UK. (A migrant scales a fence to reach the railway. Photo: AFP)
But kept back by border checks, ever tighter security and the geographical barrier of the 42-kilometre (26 mile) stretch of sea, the migrant community has been forced to set up a temporary home in camps around the city from the infamous Sangatte to the latest “The New Jungle”.
While all those caught up in the chaos – whether despairing migrants, infuriated lorry drivers, or British tourists – have come and gone over the years, the city itself and its beleaguered population have been unable to escape.
The ever-worsening situation has worn out the locals, who say that not only is the reputation of Calais ruined but that tourists aren't interested in stopping by anymore, meaning businesses are hit hard and young people are desperate to leave at the first opportunity.
READ ALSO: Five reasons you should visit Calais (The church in the New Jungle. Photo: AFP)
“When I say I come from Calais people immediately think I live in a town that's under siege,” business student Lucas Caudmont tells The Local.
“Our reputation has been tarnished. When I hear people saying Calais is overrun by migrants I get frustrated and angry. Calais is really beautiful, a cultural town, it's architecturally rich and historical. But people are concentrating on the migrant problem.”
His sentiments are echoed by many in the city of around 70,000 people. Most seem to think that it's not the migrants who are the problem, rather that it's the international attention on their efforts to smuggle themselves through the nearby Channel Tunnel.
Indeed, many say that the migrants are polite when they come into town, keeping to themselves or making the effort to speak French when buying food or drinks. (A Calais local, right, speaks with migrants before recharging their mobile phones. Photo: AFP)
Others The Local spoke to were less optimistic, however, particularly considering the swirls of unconfirmed rumours about recent sexual assaults by migrants, not to mention the large scale brawls known to break out inside the camps among migrants of differing nationalities.
“I work near the migrants and I'm a bit scared. I don't know what they will do to us. If I wasn't able to find a job here I would leave for southern France,” said Matthieu, a mechanic who works in the Channel Tunnel.
A local baker added: “This place is dead. The tourists don't want to come here and the people who live here are scared.”
The presence of the migrants has also caused a split in the local population. A recent march in support of the migrants also saw anti-immigration group “Sauvons Calais” (Let's Save Calais) demonstrate outside the Town Hall holding banners reading “Calais – a clean city, made dirty by migrants.” (see photo below) (Photo: AFP)
There were also recent reports of far-right youths driving around Calais at night attacking migrants.
However, if it wasn't for the fact that the New Jungle was on the eastern side of town and that Channel Tunnel terminal was on the south west, the residents of Calais might not even notice the migrants were there – especially considering that the campsite now has its own shop, church, mosque, and school. (The New Jungle, top right, and the entrance to the Channel Tunnel, bottom left. Photo: Google Maps)
And indeed, save for those migrants crossing the town at night to reach the tunnel, and those who choose to hang out in the city's parks, residents say the majority of the 4,000 or so migrants stay out of town, with many remaining in their campsite.
If images of a Calais under siege are overblown, the city's economy has been affected particularly when it comes to tourism. Only a tiny proportion of France's 83 million or so annual visitors will ever set foot in the city.
A taxi driver, Jeff, says that the city is just a shadow of its former self.
“There's no tourism here – there's nothing. The newspapers all say that Calais is like Baghdad, but when the tourists actually come into the city they say it's beautiful,” he says, while waiting in a line of taxis at Calais train station.
“This is very bad news for tourism. It's bad for taxi drivers, hotels, restaurants, camping sites…”
Pierre Nouchi, the owner of La Sole Meunière restaurant, says that business has seen a 40 percent drop compared to last year's holiday season, and that the vast majority of the ten million people who annually pass through Calais never stop.

(Pierre Nouchi blames the international media for Calais's reputation. Photo: The Local)
“And the problem isn't the migrants, it's the image of Calais. The media has unfortunately said all these dramatic things about Calais – but there's absolutely nothing like that in the centre of the town,” he said. “The media has killed us.”
Nouchi, who is also the president of the local UMIH union which represents bars, clubs, hotels, and restaurants, says there's not much he can do.
“All we can say is that it's nothing like Baghdad – come and see for yourself. This is a tourist city, we have a superb beach, the town hall, a magnificent lace museum and total security. Yes, there are migrants, but they're on the edge of the town just like they are in Paris, London, in Italy and Greece.”
While there still are tourists dotted across the city, staff at the Notre Dame Cathedral and the local lighthouse both say their visitor numbers have seen a considerable dip, especially among British visitors.
But not all tourists are scared off.
Helen Jeffrey from Nottingham was visiting for the day with her family, back after a week-long visit to the city last year.

(Helen Jeffrey and her family. Photo: The Local)
“In the British press they're telling us to be wary, to keep your window shut and car locked while in a vehicle. But we've never had any issues, British media have made it out to be worse than it is, they're scaremongering, and it's going to do nothing for tourism. Some people have cancelled their holiday after being put off,” she said.
“But this is my two-week holiday and we've paid for it. We're not changing our plans, nobody's going to stop me.”
A woman running a bar by the Calais train station, Stephanie, is equally determined and just as angry towards the British press.
“I have no problem with the migrants. I sleep well every night. The English press write bad things, they say 'Don't go to Calais, it's too dangerous. But look at me – I live in Calais and I'm OK.”
While the town's outspoken Mayor Natacha Bouchart has been quick to blame the UK for the crisis, threatening on Thursday to open the border, Calais residents were more reluctant.
Most that The Local spoke with saw their town was part of a Europe-wide problem.
Nicolas, a business student, said that it was high time for Europe-wide intervention.
“If all of Europe worked on this, maybe we could come to a solution,” he told The Local.