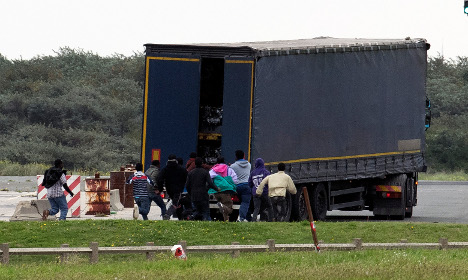 Albanian traffickers who help migrants hide in trucks have been arrested in France. Photo: AFP

Four of them were Albanians, the prosecutor's office in the town of Boulogne-sur-Mer said. The fifth, a woman, was based in France, it said, without specifying her nationality.

They were arrested on Tuesday and are suspected of enabling people to cross the Channel illegally by hiding them in trucks being transported on ferries.

A police source suggested the gang was working in tandem with some truckers.

About 3,000 migrants and refugees are camped out in a makeshift tent village in the northern French port of Calais hoping for a chance to cross into Britain either hidden in ferries or trains crossing the Channel.

France has beefed up its police presence in Calais while Britain has pledged to improve fencing and provide more sniffer dog teams.