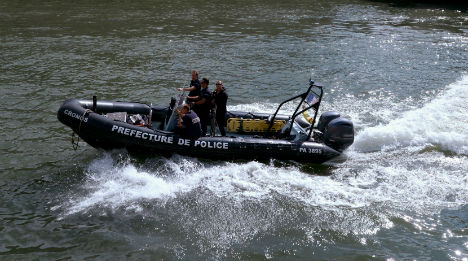 Police will be out in force on Thursday to patrol Tel Aviv on Seine. Photo: AFP
Paris was to deploy some 500 police along the River Seine on Thursday, at the start of a controversial beach attraction dedicated to Tel Aviv.
The city authorities' decision to devote one of its hugely popular “Paris plages” (Paris beaches) days to celebrate Tel Aviv has sparked uproar among some left-wing politicians and pro-Palestinian groups.
Protesters have vowed to celebrate a “Gaza beach” nearby and police are bracing for potentially violent clashes.
Police will search beach bags before and after the 12-hour event with security levels still on top alert after the January Charlie Hebdo attacks that left 17 dead.
The Town Hall said in a statement that the reinforcements would be in place “to prevent the disruption of public order”, and would see bag searches on the site as well as extra monitoring in both directions beyond the actual site of the beach.
The plan – which will see Israeli music, food, and games hosted on the temporary beach on the banks of the River Seine on Thursday – has proved contentious all week as leftist and pro-Palestinian groups have made their voices heard.
Paris Mayor Anne Hidalgo, however, wrote in an opinion piece in Le Monde newspaper on Tuesday that she supported the event and invited “Parisians to come in droves”.
Prime Minister Manuel Valls tweeted out his “full support” of the plan, adding that people should “stop the flood of stupidity”.
But it appears droves of Parisians will also be boycotting the event, including left-wing councillor Danielle Simonnet who has been among the most vocal opponents. She told France Inter radio that the plan was nothing but “a nice bit of PR” for the Israeli government. (A beach goer at the Paris Plages. Photo: AFP)
Simonnet was supported by pro-Palestinian group CAPJPO-Europalestine, which called for protests if “this obscene event is not cancelled”.
Critics said the timing of the tribute to Tel Aviv was particularly ill-advised, coming after a Palestinian toddler burned to death in a July 31st arson attack in a West Bank village, suspected to be the work of Jewish extremists.
The child's father died at the weekend of his injuries.
Many social media users, meanwhile, expressed their outrage, with some calling for the French to boycott the event, while many others shared graphic pictures of children dead on the beaches of Gaza. One went as far as to create a moving “Gif” image showing what appeared to be a missile hitting children playing on the Paris beach.
Their tweets continued to flood Twitter since the weekend. (Photo: Studio Touch & L'Agence Culturelle)
A petition urging Paris authorities to call off the Tel Aviv-themed day had gathered almost 23,000 signatures by Wednesday afternoon.
Eytan Schwartz, foreign policy advisor to Tel Aviv Mayor Ron Huldai, praised Hidalgo's “courage” in “rejecting pressure and attempts to have this event cancelled”.
“We are delighted with our cooperation with the city of Paris, which stands by its friends,” he told AFP.
France is home to Europe's largest Jewish community and the largest number of Muslims on the continent although its secular laws mean that no precise figures are available.
Tensions between the two communities burst into the open last year during Israel's offensive in Gaza, especially in the working-class Paris areas of Barbes and Sarcelles.
A banned pro-Palestinian demonstration last July turned into a running battle between rival protesters and the police.
Url copied to clipboard!