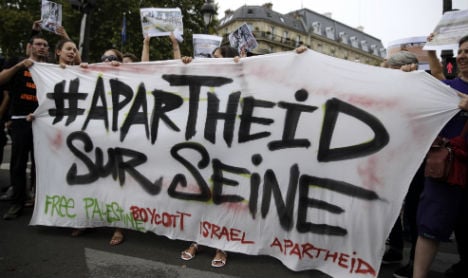 A rival "Gaza Plages" was set up nearby by pro-Palestinian protesters angry at the 'Tel-Aviv beach' event. Photo: AFP

The culture of Israeli coastal city Tel Aviv was celebrated in Paris on Thursday, despite vocal opposition from leftist politicians and pro-Palestinian groups.

The controversy around the event – which comes a year after pro-Palestinian protests descended into riots in Paris – has left authorities on edge and prompted police to send 500 officers to patrol the event.

Nevertheless a stretch of Paris Plages was renamed “Tel Aviv on Seine” on Thursday although it appeared that visitors, perhaps put off by the hullaballoo, were vastly outnumbered by both police and journalists and security guards.

Bemused locals who headed down to “Tel Aviv Sur Seine” had to manoeuvre through bag checks, security pat-downs and metal detectors to reach the small stretch of sand on the banks of the Seine.

“Coming today is an act of solidarity with the Jewish people,” said Cecilia, an Italian stretched out on a beach chair, adding that she was “a little afraid that this degenerates”. Several pro-Palestinian protesters did turn up to demonstrate their disgust for an event that they claim shows  a tacit support of Israel's policy towards the Palestinians. An accusation that has been fiercly denied by Paris Mayor Anne Hidalgo. Thursday's event consisted of little more than a few people playing bat and ball in front of a picture of Tel Aviv, but it has been enough to excite a major media brouhaha after objections from anti-Israel protesters.

“There are 50 visitors for 500 journalists. I feel like I'm on the red carpet at Cannes,” said one onlooker.

The Tel Aviv section of the beach, not far from Notre Dame cathedral, was only around 200 metres (yards) long and guarded by a phalanx of riot police on either end.

On the other side of the police cordon, a large number of pro-Palestinian protesters began arriving around midday to set up their rival “Gaza Beach”. Waving Palestinian flags, chanting slogans and handing out flyers, the activists were keen to present the issue as more than just a media storm in a teacup.

“The mayor of Paris wants to make Tel Aviv a town like all the others, when in fact it's the capital of a colonialist state that bombards civilian populations,” said Serge Bonal, of EuroPalestine, one of around a dozen organisations taking part in the demonstration.

City authorities resisted pressure to scrap the event and Prime Minister Manuel Valls voiced his “full support” for the initiative.

“Even in the context of the Israel-Palestine conflict, Tel Aviv remains a town open to all minorities,” said Paris Mayor Anne Hidalgo.

“It's a progressive town, which is hated as a result by all intolerant people in Israel.”

The deputy mayor of Paris, Bruno Julliard, warned that the controversy risked dampening the event, during which authorities pour sand onto the banks of the Seine and set up food and drink stalls.

“We wanted a festive atmosphere with fun, free shows, concerts, food trucks and the like,” he told French radio.

“In fact, there will be a significant police presence, so it will maybe be a bit less festive than we expected,” he added.