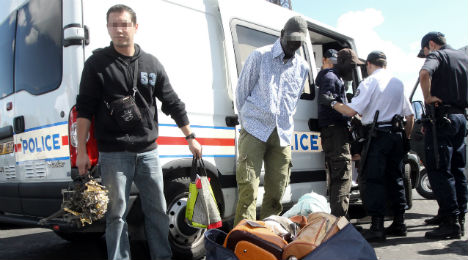 Police officers in Paris confiscate miniture Eiffel Towers from illegal sellers. Photo: AFP
The amateur clip, apparently taken by a tourist, was filmed earlier this month in the Jardin des Tuileries in central Paris, during the middle of the day.
It appears to show an attempted arrest of an illegal Eiffel Tower seller by police that quickly degenerates into violence.
The clip was uploaded on a Russian website but has since been shared around on Twitter and on French news sites.
As police try to confiscate the miniture Eiffel Towers sold by the man, several other sellers try to intervene and are seen throwing punches at police and launching kicks to an officer's head.
The flash confrontation is only dispersed when a female police officer uses pepper spray on the group.

Des vendeurs à la sauvette agressent des… par leparisien
The incident may not be an isolated one as police union Alliance spoke of their growing concern around illegal sellers, known as “vendeurs à la sauvette”, “who don't hesitate to physically attack police officers.”
The video emerges as new stats published in Le Figaro on Thursday reveal an 8 percent rise in violence comitted against police officers and other officials in authority in the French capital.