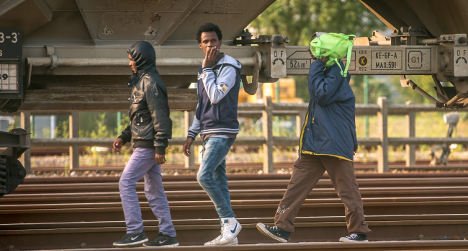 Migrants on railway tracks in Coquelles, near Cala

UK Prime Minister David “Cameron is mocking us, he is holding our territory in contempt and imposing his laws on the people of Calais,” said the outspoken city's mayor Natacha Bouchart.

If the British “don't want to sit down at the table and (look at issues of) security, humanity and economic solidarity, we should open the border,” said Bouchart, who is also a senator with France's Republican Party.

“Morally we can't do any more but our population is supportive (of the migrants),” she was reported as saying in Le Parisien newspaper.

“What we are asking for today is economic aid to help us get through this financially,” she added, also calling on French President François Hollande to put his foot down and deal with the immigration crisis.

The comments from the Calais mayor come as French security forces and police struggle to repel repeated attempts by migrants to force their way into the Channel Tunnel — a situation which has created international headlines and became a symbol for the EU's failure to deal with the issue of migration.

Bouchart has previously threatened to blockade the port of Calais if the British government did not send more help to the besieged port town.

But at a government level UK Prime Minister David Cameron and French ministers have so sar refused to take part in a blame game and publicly insist however that the tow countries are working together.

In September last year London agreed to hand over an extra €15 million over three years to help deal with the crisis in Calais.

And in July UK Home Secretary Theresa May said another €7 million would be made available to increase security at the port and Eurostar terminal in Calais.

The latest development has seen the UK saying it will send an 100 extra border guards across the Channel.

But signs of a split are growing and there have been increased calls for the British border, which is effectively on the French side of the Channel to be moved back to Britain.