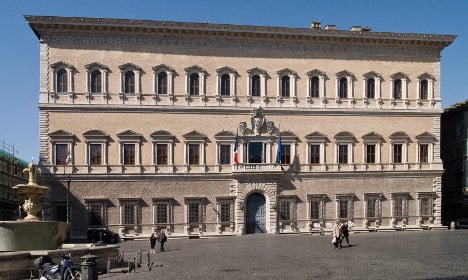 The letter was sent to the French embassy at Palazzo Farnese in Rome. Photo: Myrabella/Wikicommons

The letter was delivered to the French embassy at Palazzo Farnese, in the heart of Rome’s historical centre, shortly after 2pm on Wednesday.

It was opened by an employee who was sorting the embassy’s mail. When she opened it the envelope burst into flames, touching her face, Rome daily Il Messaggero reported.

“I saw the flame and I immediately thought it was a bomb,” the employee told the paper. “I threw the envelope and ran away. I was lucky the sparks didn’t hurt my eyes or hands.”

The alarm was raised and the whole building was then evacuated.

The woman, who was in shock, was taken to hospital for tests. She did not suffer any injuries.

The French ambassador, Catherine Colonna, was immediately informed and her office secured.

There was no message inside the envelope and no one has yet claimed responsibility for the letter.

Embassy staff have been ordered not to touch any more letters in case there are more letter bombs.

The letter is now being investigated by Digos, the police department dealing with political security. A counter-terrorism team is coordinating the investigation.