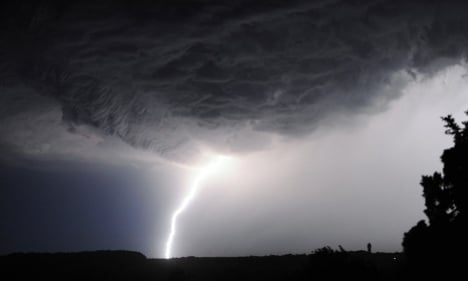 Thunder, lightning, and hail are forecast to hit north-western France on Wednesday night. Photo: AFP
France's weather agency Météo France issued an “orange warning” for a further 12 départements in France in its 4pm bulletin on Wednesday. These take the total number of départements on alert to 19.
The reason? Thunder and hail storms are approaching from the west.
The agency warned that there would be lightning, strong winds, and enough rain to cause potential flash flooding in people's cellars. It warned residents to avoid taking shelter under trees, and to avoid using the telephone or electrical appliances. (Photo: AFP)
An Orange warning is the second highest warning level and asks the public to be “very vigilant”.
The areas since the morning are Finistère, Côtes-d'Armor, Ille-et-Vilaine, Manche, Calvados, Orne, and Mayenne – all in the north and north west of France. Météo France added Seine-Maritime, Eure, and Sarthe to this list in the afternoon.
It also added Charente, Charente-Maritime, Dordogne, Gironde, Landes, Lot-et-Garonne, Pyrénées-Atlantiques, Gers, and Hautes-Pyrénées – all in the south west of France. See map below. The storm will hit in the late afternoon and early evening, while the majority of the rest of France will be enjoying a late warm and sunny night (see map below). By late evening, however, the hail storms are forecast to hit, marked by the letter G in the map below. These storms will remain throughout most of the night and into the early morning, gradually spreading south along France's Atlantic coast. And it's bad news for the rest of the country on Thursday, as the storms will push towards the east throughout the day. The map below shows France in the early evening on Thursday. (All photos and maps: Météo France)

The weather forecast is also bad news for stargazers, with Wednesday night said to be the best opportunity to see this year's Perseid meteor shower (if only the weather remains clear).

If you're in a part of France without clouds, here are some tips to catch what's been dubbed as one of the best celestial events in years.