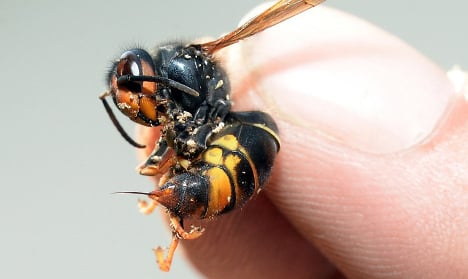 The Asian hornet is around five centimetres long when fully grown. Photo: AFP
The Asian hornet may have finally met its match.
The five-centimetre insect, which was accidentally introduced in France in 2004, has been decimating local bee populations for years as well as killing a number of people.
It has even been responsible for at least four deaths in France, most recently in late July when a 60-year-old man with heart problems was stung on his face and neck in Brittany. (Photo: AFP)
The insect, which has a 7cm wingspan and a venomous sting, feeds on bees and their honey and has spread across much of western Europe.
Now, however, the Asian hornet's days in France may be numbered after the head of a botanical garden in Nantes found a Sarracenia stem full of dead hornets (see picture below). (Photo: AFP)
The Sarracenia stem doesn't attract honeybees or wasps, meaning it's not a threat to the local insect population, but does seem to have made a “very selective trap” for the Asian hornet, botanists Romaric Perrocheau told the AFP news agency.
The Sarracenia nectar and the pheremones on its leaves prove to be a delicious meal for the hornets, but once they crawl inside the plant they fall into its pitcher and are digested by natural juices inside. The plant is native to north America and is not considered a threat to native European flora. (Photo: AFP)
The Asian hornet has proved to be a painful pest in France, not least due to the fact that they build nests that are difficult to find and destroy (see above).
Unlike their Japanese cousins, the European honeybees are helpless to fight the aggressive hornet. The Japanese honeybees attack intruding hornets by swarming them and killing them by raising their body temperature to unbearable heats for the hornet. See video below.
French botanists will now team up with entomologists in an attempt to find out exactly what is attracting the hornets and whether the plant can be used to fight the Asian hornet population on a larger scale.
Last year, Britain put the hornet on a “blacklist”, as a Parliamentary report warned the “deadly” invader could soon cross the Channel and land on British shores.