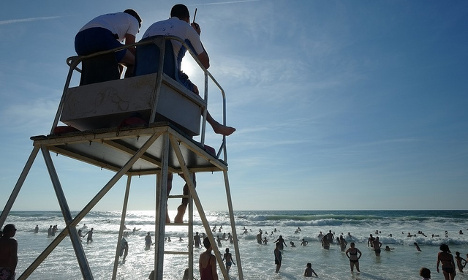 The beach at Labenne where the British holidaymaker died on Monday. Photo: AFP

The British holidaymaker, 36-year-old Rob Walton, died on Monday after bathing at Labenne beach which is located on the Atlantic coast, just north of Biarritz.

He was the head coach at Rugby Lions in Warwickshire, and the team sent a statement offering their condolences on Tuesday afternoon.

“[He] was instrumental in the rebuilding of Lions and his hard work, determination and sense of humour will be sadly missed by us all”.
“Our thoughts and prayers go out to his family at this sad time. He may have passed away but he will not be forgotten.”
The exact circumstances around the tragic death remain unclear but according to a report in the Sud Ouest newspaper the British father of four “broke his back while diving into the huge wave”.

It is then believed he was caught in a “particularly violent wave” and dragged to the bottom. His body was spotted floating in the shallow waters by another swimmer.

However Lionel Couture, director of services at Labenne Town Hall told The Local on Tuesday morning that officials still do not know the exact cause of the drowning.

“We do not yet know the cause of the drowning because no autopsy has taken place,” Couture said. “He may have fallen ill while swimming, which can happen, or he may have been hit by a wave.”

“When he was brought of the water he was in an advanced state of drowning.” Firefighters and paramedics were called to the scene and spent around an hour trying to revive him, but were unable to do so.

“They carried out cardiac massage and used a defibrillator but after an hour a doctor took the decision to stop as there was no hope,” Couture told The Local.

Further tests are being carried out to determine the exact cause of death. Although this part of south west France is known for its big waves that attract surfers, witnesses said the sea was not particularly rough on Monday. It is believed the victim was staying at a campsite in Labenne with his wife and four children, who are receiving counselling after suffering from shock.

Couture described the sea at Labenne beach as “strong” at the at swimming outside of the zone monitored by lifeguards is forbidden.

“A death like this in summer is extremely rare,” he said. “Although they do occur occasionally in winter when swimmers take to the sea.”

The victim at Labenne is believed to be the second British national to drown whilst swimming in the Atlantic Ocean this summer.

A spokeswoman for the British Embassy told The Local: “I can confirm the death of a British National in France on 10 August. We are in contact with the family to offer support at this difficult time”.

The British Consulate in Bordeaux has warned nationals on holiday in the area of the dangers of swimming in the Atlantic Ocean where strong currents called “Baïnes” can increase the risk of swimmers getting into trouble.

'Every year, several people drown whilst swimming in the Atlantic Ocean when they are unexpectedly caught in these unusually strong currents,” said a statement from the Consulate.

“Even very strong swimmers can be victim to these groundswells which are a particular feature of this coastline. It can be especially dangerous for children who should not be left alone even whilst paddling.”

The man's death is the first drowning in the area but authorities in France have been warning tourists to take precautions when swimming in the sea off the Atlantic and Mediterranean coasts after dozens of drownings this summer.

Comprehensive advice for swimming along France's Atlantic Coast can be viewed here.