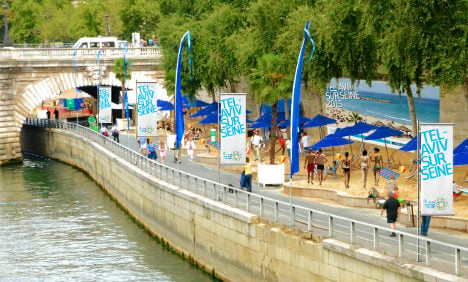 Paris Plages prepares to host "Tel Aviv sur Seine" but not everyone is happy. Photo: Studio Touch & L'Agence Culturelle
On Thursday August 13th the annual Paris Plages festival by the banks of the River Seine will celebrate the culture of the Israeli city of Tel Aviv, in an event called “Tel Aviv sur Seine”.
The move will see a celebration of the second-most populated city in Israel – including Israeli food, music, beach games, and more – between the hours of 10am and 10pm by the Pont d'Arcole and the Pont Notre Dame.
Cool Israël, a site marketing Israel to French speakers, noted that the idea was a joint venture from both Town Halls, and was the brainchild of Paris Mayor Anne Hidalgo who visited Tel Aviv last May.
The plan, however, was slammed by Paris city councillor Danielle Simonnet of the Left Party (Parti de Gauche).
In an angry rant at the weekend the councillor blurted “Tel Aviv is a not Copacabana!” suggesting the Israeli city is not the most appropriate party beach town to be celebrating.
She has called for it to be cancelled.
“Just one year after the massacre in the Gaza Strip by the Israeli army, and even as the Israeli government intensifies its policy of settlement construction… Paris City Hall dares to organize 'within the framework of its cultural partnerships with the world's largest cities' a day honoring Tel Aviv,” Simmonet wrote on her official blog on Saturday.
She complained about a lack of discussion “with humanistic Israelis or about the situation of the Palestinian people”, calling the plan “the height of indecency”.
Last year Paris was rocked by riots as several pro-Palestinian protests descended into violence as the conflict in Israel spilled over into France.
The councillor added that there was still time to cancel the event or to change the programme, adding in an interview on Sunday that a day of peace should be scheduled instead.
The councillor's comments kicked off a flurry of debate on social media, seeing the #TelAvivSurSeine hashtag topping Twitter trends over the weekend and remaining near the top on Monday morning.
Many social media users expressed their outrage, with some calling for the French to boycott the event, while many others shared graphic pictures of children dead on the beaches of Gaza. One went as far as to create a moving “Gif” image showing what appeared to be a missile hitting children playing on the Paris beach.

Simonnet was supported by pro-Palestinian group CAPJPO-Europalestine, which called for protests if “this obscene event is not cancelled”.
“It is out of the question to allow such an immoral event to go ahead in a public space,” the organisation said in a statement, adding that it was “not about religion but about international law, human rights and human dignity.”
Bruno Julliard, a top official in the mayor's office, sought to downplay the uproar, saying people should distinguish between “the brutal politics of the Israeli government and Tel Aviv, a progressive city”.
Republican MP Eric Ciotti said he was “outraged by the controversy launched by the far left”, adding that it “very clearly had hints of anti-Semitism”, reported Europe 1.
By Sunday afternoon, Paris city officials said that they had noted the outcry, but that the day would go ahead as planned.
“The whole point of this day is so that Parisians who can't travel can still have a holiday,” a Town Hall official told Le Parisien newspaper.
The official added that Tel Aviv was a “progressive” and “modern” city, noting that Paris had partnerships with Palestinian cities too.
Organizers of Tel Aviv sur Seine have insisted there will be adequate security around the event.