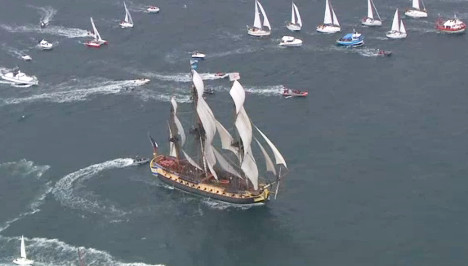 Hermione sails back home into Brest. Photo: AFP Screenshot
The Hermione was due to land with its 80-strong crew at Brest in northwestern France, accompanied by a fleet of 25 traditional boats and a modern navy frigate.
It took almost two decades and $32 million (€25 million) to build the exact replica of the three-masted tall ship, using only 18th century shipbuilding techniques. (Hermione in Virginia: Photo: AFP)
The Hermione finally set sail in April, retracing Lafayette's journey across the Atlantic and calling at more than a dozen stops along the eastern coast of the US and Canada. (Hermione sails past the Statue of Liberty in New York. Photo: AFP)
It took part in July 4 celebrations in New York and earlier in a three-day celebration in Yorktown, Virginia where the original participated in the decisive 1781 victory over the British by George Washington's American and French forces. (Photo: AFP)
Speaking to AFP at Yorktown in June, the ship's captain, Yann Cariou, said: “She's a great ship. She behaves perfectly all the time. She responded well to gusts of wind — as did the crew.”
Lafayette, who was born in 1757 to a noble family in south-central France, joined the American Revolution at the age of 19, inspired by the cause. (Hermione in Maryland. Photo: AFP)
Beside the French troops who joined the American rebels in the month-long battle at Yorktown, French ships helped blockade the port, leading to the British surrender.
Back in 1778, the original Hermione took a mere six months to build. The new replica took 17 years to construct, bringing together hundreds of
craftspeople from around the world. (Hermione in New York. Photo: AFP)
The project was financed by more than four million visitors to the shipyard in Rochefort in southwestern France where the Hermione was built, as well as through crowd-funding initiatives for specific parts of the ship.
The Hermione will stay in port at Brest until next Monday before heading back down the French coast, stopping in at Bordeaux before docking at its home at Rochefort.