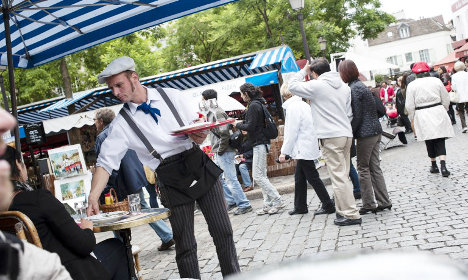 'Hello sir, what can I get you?' Photo: AFP
The French have somewhat of a reputation for their bad “eengleesh”, and if you read the news you'll see why.
One report in November found that the French were the worst at English in the whole of the EU. “Improving the country’s English skills is not a subject of national debate,” the report said.
And then you have the country's president helping to cement the view that the French are hopeless at English when he made international headlines by signing off a letter to Barack Obama with the words: “Friendly, Francois Hollande”.
While they may be considered the poor pupil of Europe when it comes to their level of English, the French are even more reputed for their resistance to the language.
When the top complaint from French TV viewers last year was that they heard too much “needless English” on the TV and the radio, and the French language police are regularly banning words, then it's perhaps not hard to see where the reputation comes from.
Indeed so much is said about this reluctance to speak English that tourists are often given the impression that if they don't at least try to speak French to a local they will just be abruptly ignored. (Tourists in Paris are often warned to learn some French before arriving. Photo: AFP)
But while the French may lag behind the Dutch, the Germans, and of course the Scandinavians, (and it needs to be said their English is far better than the typical English speaker's French) when it comes to speaking English, it's a vastly inaccurate cliché to suggest they can't and don't want to speak it.
After spending the year in Paris, I've been amazed at how often French people try to speak English with me. Granted, it could be that my Australian accent is so strong that they're trying to put me out of my misery like a wounded kangaroo… but I'm not so sure.
Even after I've just said my name, French people often love to jump into often imperfect English and I think it's quite an admirable thing to do. Even more so when they add: “But you can speak French with me if you prefer”, which they often do.
While it's mostly the younger people who make the switch, I can also count the friendly middle-aged woman at my local fast-food restaurant, and my middle-aged neighbour. And let's not forget the fact that English jargon is creeping into French workplaces more than ever and the young professionals are only too happy to welcome it.
It feels like the exact opposite of the stereotypes I was given prior to visiting France.
It also feels they are doing it out of politeness and genuine enthusiasm, which wasn't the sense I got while learning Swedish in Stockholm. There, it felt like the Swedes were so good at English that they were just showing off, and by doing so were preventing us frustrated foreigners from learning the local lingo.
A Parisian man who teaches English in a Paris high school said the younger generation is less scared of “succumbing” to English than their seniors.
“Young French people love learning English,” he told me at a cafe in the second arrondissement. “The majority of my students are really into it, even when they're no good at it.”
“They know they need to learn English if they want to keep up to date with what's happening in the world. They don't want to wait for the French newspapers to translate it anymore,” he said.
He added that many of them are consuming media – especially music – that was in English, and that they wanted to know what they were listening to. (High school students in France. Photo: AFP)
And it makes sense. A young man from Grenoble told me that he learned English thanks to a combination of great downloadable American and British TV, and his impatience to wait for the dubbed version. The result, he said, was that he had now travelled more and more confidently than he'd ever have thought possible.
Back at the cafe, the teacher said that any Parisian with a shred of common sense would realize that speaking English opened opportunities, not least considering the 83.7 million tourists that visit France per year.
“Take this waiter, for example,” he said, pointing to a typical polished waiter in a black apron. “He knows that if he doesn't speak English then he could lose a tip, or even a customer.”
Almost as if on cue, the waiter approached a family looking at the street menu and ushered them inside naturally, charmingly, and fluently in English. Moments later, he did the same thing in Spanish.
The idea the younger generations of French people being less resistant to the invasion of English echos comments from the Culture Minister – the chief guardian of the French language. She told The Local in March that there was no point in trying to protect and preserve French because it's “enriched by outside influences”.
So whether it's to be enriched, to be polite, to get a tip from us foreigners, or more likely to be able to get a job, the new younger generation of French seem to be devouring English like a warm croissant.
Now it's just a matter of catching up to the Germans.