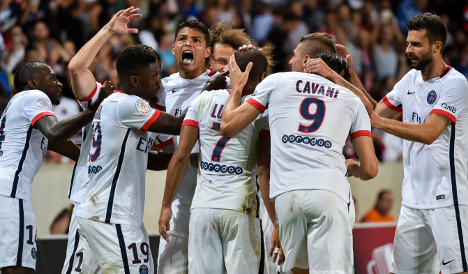 Bordeaux and Saint-Etienne both suffered Ligue 1 opening day defeats on Sunday as French football was still suffering the shockwaves of Marcelo Bielsa's resignation as Marseille coach.

In the weekend's final match, last season's runners-up Lyon were held to a 0-0 draw by Brittany side Lorient at their Stade Gerland.

“It was above all two terrible defensive errors that cost us the points today,” said Sagnol.

“I saw a team who were flat, who didn't want to get forward and who didn't have the desire, after the first goal for us which was a bit lucky, to kill off the match,” added the former French international defender.

“It's sad because it was the first match of the season at home and we start with a defeat but we're just going to have to work hard this week and get ready for Saint-Etienne with what I hope will be more desire from the players to try and get a result at their stadium which is never easy,” added Sagnol.

At Toulouse, Loic Perrin gave Saint-Etienne a 17th minute lead before the home side turned matters around.

Martin Braithwaite levelled the match 10 minutes after Perrin's opener before star striker Wissam Ben Yedder put away the winner, eight minutes into the second half.

Toulouse finished the match with 10 men when Aleksandar Pesic was shown a straight red card with four minutes left.

In the weekend's final match, Lyon ran into an inspired goalkeeper in the form of Lorient's Parisian Benjamin Lecomte who defied Hubert Fournier's side time and time again.

On another down note for Lyon, star striker Alexandre Lacazette was substituted in the second half with what appeared to be a back problem.

Meanwhile, Bielsa's shock exit at Marseille after Saturday's opening 1-0 defeat at home to Caen sparked a bitter war of words between the Argentine and his former employers. Former European champions Marseille accused the Argentine of trying to hold them hostage over his new contract.

A strongly-worded club statement claimed: “Marseille possess a sufficiently rich history to refuse to surrender to the rule of one man”.

The French giants insisted they wouldn't be “held prisoner by a man who places his personal interests high above those of the club”.

The attack on the man known as 'El Loco' (the mad man) came less than 24 hours after he had delivered what captain Steve Mandanda described as his “hammer blow”.

“I am, like all the supporters, dazed by Marcelo Bielsa's shock decision,” Labrune declared in a statement.

“However, we take note of this decision which places the club in a difficult place having started the new season with a home defeat.”

He confirmed that one of Bielsa's assistants, Franck Passi, would step up as caretaker coach.

Bielsa, who had been in charge since May 2014, wrote in his resignation letter: “I am sad and frustrated.

“I cannot accept the situation of instability at the club.

“We had reached an agreement on a contract extension for 2016-2017, which was missing just a signature.”

“They wanted to change the contract,” he complained.

“I took this final decision as working together requires a minimum of trust, which we do not have.”

Bielsa, who guided Chile to the last 16 at the 2010 World Cup, was at pains to point out his abrupt exit had nothing to do with money, revealing he had turned down a new deal multiplying his salary threefold.

Champions Paris Saint-Germain opened the Ligue 1 season on Friday with a hard-fought 1-0 win at Lille.