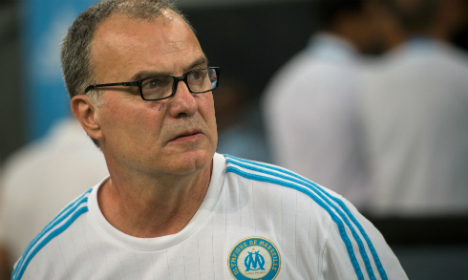 The announcement came as a shock. Photo: Bertrand Langlois/ AFP

“I have resigned from my post as manager of Marseille,” the Argentine announced at the end of his post-match news conference.

Bielsa, 60, has been linked to the Mexico national team manager's role in recent weeks, and Marseille looked every inch a side affected by the off-field uncertainty surrounding his future.

Immediately after their lacklustre defeat, Bielsa, who had only been in charge at the Stade Velodrome since May 2014, announced his resignation.

“I have finished my work here, I will return to my country,” said Bielsa,who guided the former European champions to fourth place in Ligue 1 last season.

“I thank the fans for always being behind me during games and on a dailybasis.

“I am sad and frustrated. I cannot accept the situation of instability atthe club,” added Bielsa, who accused the club of last-minute changes to the details of a contract he was ready to sign which would have kept him at Marseille until 2017.

To add spice to the drama, Bielsa left it to his interpreter to read outthe key phrase of his letter of resignation which was sent to Marseille president Vincent Labrune.

“We had reached an agreement on a contract extension for 2016-2017, which was missing just a signature,” he wrote in his letter.

”They wanted to change the contract,” the Argentine wrote. “I took this final decision as working together requires a minimum of trust which we do not have.”

“It's a massive, heavy blow,” said Mandanda, who told reporters that one of Bielsa's assistants, Franck Passi would take temporary charge.

“At Friday's press conference, everything was fine, it was all positive.

“He was an important part of the club, for the team. We are disappointed. We don't know the ins and outs of it, we don't know what has happened. But we respect his decision.”

Marseille got off to a flying start last season — winning eight of their opening 10 matches — before fading to fourth, 14 points adrift of champions PSG.

The only goal of Saturday's game arrived in the 27th minute and in spectacular fashion as Andy Delort fired a right-footed piledriver beyond Mandanda.