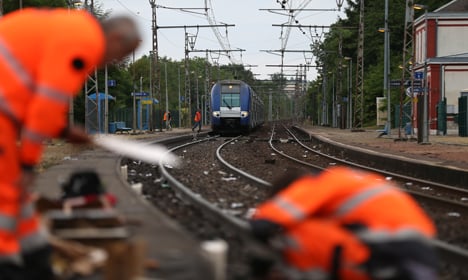 Three people from the same family were killed in the accident. Photo: Charly Triballeau/AFP

The three victims were in the car “which seems to have stopped in the middle of the track” at Conde-sur-Huisne, some 150 kilometres southwest of Paris, at 8:22 pm, local official Pascal Vion told AFP.

A fourth person, whom Vion described as an elderly woman, was outside the car when the collision occurred, he said.

A local prosecutor told the daily Ouest-France that the woman's husband, daughter and granddaughter were in the car, which apparently had stalled on the track.

“It appears there were two elderly people who were the grandparents, there was also their daughter and their granddaughter,” he told the paper.

“One of the occupants of the vehicle got out to try to push it,” he said, adding that an investigation was under way to determine why the car had stopped on the track.

Firefighters said the collision set the car on fire and that it was dragged several hundred metres.

None of the 34 passengers on the train, which was travelling from Le Mans to the French capital, was hurt.