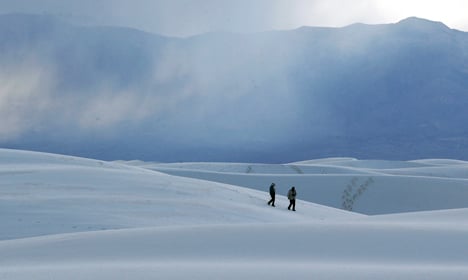 David Steiner, 42, and Ornella Steiner, 51, both from the town of Bourgogne near Reims, had been hiking in the White Sands National Monument on Tuesday afternoon when they apparently died from heat exhaustion, Otero County Sheriff's Detective David Hunter said.

Park rangers found the mother first while on a routine patrol. They checked her camera and saw that she had been with two other people, Hunter said.

Authorities followed her tracks and found the body of the father, with the son nearby. He was dehydrated but responsive and was taken to a local hospital for treatment.

The New York Daily News said authorities had contacted the French consulate and the boy's grandmother had flown from France and taken custody of him on Thursday.

Otero County Sheriff Benny House told local media that the family had been traveling across the United States, visiting national parks and monuments.

House said the boy had told authorities that his mother had headed back toward the car after becoming ill on the hike. He carried on with his father.

According to the Alamogordo Daily News, House said temperatures had been between 100 and 101 degrees Fahrenheit (38 degrees Celsius).

National Parks spokesman Patrick O'Driscoll told the newspaper there was no shade or water along any of the trails in the dune-filled White Sands National Monument.

Ornella Steiner had worked for about 20 years for the mayor's office in Reims.

“She was a very involved person, very vibrant, active and full of life,” said deputy mayor Kim Duntze, who worked with her.

The Steiner couple loved traveling and had visited the southern United States for 10 days in 2014.

“When they came back from that trip, they often said: 'We'll go back for a longer time,'” Duntze said. “They were supposed to stay there for five weeks this time, it was the trip of their dreams.”

David Steiner was a business manager in a communications agency.

TOURIST
The 9 best festivals and events in France in autumn 2021
Url copied to clipboard!