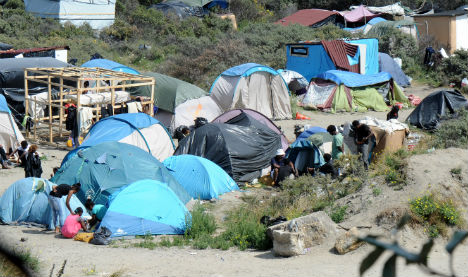 France needs to draw up a civil emergency plan for the Calais migrant crisis. Photo: AFP
The UN refugee agency said for the past year it had been calling for an “urgent, comprehensive and sustainable response” by Europe as a whole, but especially by French authorities to the worsening asylum crisis and reception conditions in Calais.
“Let's treat that as a civil emergency,” Vincent Cochetel, head of UNHCR's Europe division.
He stressed though that the emergency was a small one that could easily be addressed if Paris was willing to do so.
“This is a manageable situation,” he said.
Some 3,000 migrants and refugees, including many fleeing war and persecution in countries like Syria, Libya and Eritrea, are camped out in a makeshift tent village in Calais waiting for a chance to cross to Britain in what Cochetel described as “appalling conditions”.
UNHCR also voiced “alarm” at the rising death toll among people risking their lives to attempt to cross the Channel Tunnel to Britain, with at least 10 having perished since the beginning of June. Cochetel pointed out that both French and British governments had been opposed to setting up a large-scale reception centre in Calais for fear it would become a “magnet” and attract more people.
But he stressed that this fear did not remove their responsibility to find an acceptable solution, pointing out that France could easily transform some of its many army barracks around the country into proper reception centres.
UNHCR also demanded that France address the “current significant delays” for anyone applying for asylum, with it taking seven weeks for an asylum request to even be registered in the Calais region and months before accommodation is provided.
He also criticised the lack of Britain cooperation in dealing with the situation, saying that London had refused to even consider applications for legal transfer from France of asylum seekers with close ties to the country.
While the security measures being put in place on both sides of the tunnel are understandable, Cochetel insisted they were only a small part of the solution.
“It is not just with more dogs and more fences that we are going to solve Calais.
“We need a comprehensive package and we need a sustainable response,” he said, pointing out that “we have had that problem for 14 years… You don't change geography. This will continue.”