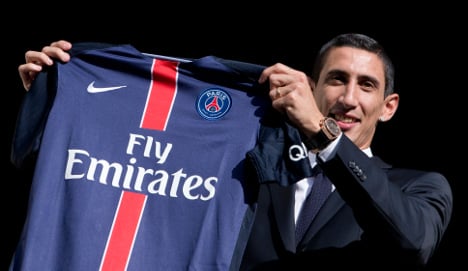 The new Ligue 1 season begins on Friday with Paris Saint-Germain expected to win a fourth straight title and the rest of
France just hoping they won't run away with the championship.

Last season, PSG eventually won the league by an eight-point margin but Lyon did at least push them all the way into May, in part because the Paris club seemed to be in third gear for most of the year.

However, right now the prospect of such a close-run campaign seems slim, with Laurent Blanc's side likely to be even stronger than the team that won every domestic trophy available last season.

Yohan Cabaye has left for Crystal Palace, but the rest of the squad remains intact and Eintracht Frankfurt goalkeeper Kevin Trapp and Tottenham Hotspur midfielder Benjamin Stambouli have joined.

With Angel di Maria signed from Manchester United PSG will target the Champions League as well as continued domination at home.

“Each year the demands get bigger and bigger,” said Blanc recently, although the challenges on the domestic front don't seem to be getting any bigger.

“We are trying to improve the team with that in mind, but it is becoming difficult.

“We are competing with some big European clubs who have no reason to envy PSG, in terms of finances or in terms of history.

“But we are now one of those big clubs.”

Crucially, no other club within France can even dream of competing financially with Paris, although Lyon, who have reached a deal to sign di Maria's teammate the Brazilian defender Rafael, are the best equipped.

They finished second last season to return to the Champions League group stage after four years away and will inaugurate a new 60,000-seat stadium in early 2016.

Nabil Fekir, last season's young player of the year, recently committed his future to the club and Lyon are hopeful last season's 27-goal leading scorer Alexandre Lacazette will accept the offer of a new, improved contract.

However, OL's pre-season preparations were overshadowed by injuries, including to playmaker Clement Grenier, and poor results.

A limp display in losing 2-0 to PSG in the Champions Trophy in Montreal compounded a miserable warm-up period, and did nothing to suggest they can compete for the duration of a season.

“We will have a budget of €170 million (£119.5m, $186.7m) this year. We have invested 450 million euros in a stadium. We have done that to win trophies and compete with PSG,” said bullish Lyon president Jean-Michel Aulas,
but he had a warning for his players.

“The lads are looking at each other as individuals more than in the past. Before they were a group of mates, now it is a team of stars with big salaries.”

The rest of the league must live with the financial reality of modern football, which means even Marseille cannot compete with sides from the bottom end of the Premier League who are dripping in the riches of England's television deal.

Monaco have sold Geoffrey Kondogbia and Yannick Ferreira Carrasco to Inter Milan and Atletico Madrid respectively. However, they have a host of intriguing new recruits including Italy forward Stephan El Shaarawy, on loan from AC Milan.

But they have kept enigmatic coach Marcelo Bielsa and have adopted an interesting recruitment policy of their own, not least by signing two men looking to kickstart stalled careers in Abou Diaby and Lassana Diarra.

Bordeaux have the boost of an impressive new stadium, while Africa Cup of Nations specialist Herve Renard is now in the dugout at Lille.

But Lille are one of the clubs who have been powerless to stop English outfits plundering their talent.

They lost Idrissa Gueye to Aston Villa, who have also snapped up Lorient's Jordan Ayew, Jordan Amavi of Nice and Jordan Veretout from Nantes for a combined total of over €40 million.

“The financial capacity of French clubs is, undeniably, not the same as that of the English,” he said after losing midfielder N'Golo Kante to Leicester City, despite Marseille also putting in an offer.

“I would have liked to see him continue his career in France. For financial reasons, both for the player and for me, it is not possible.”