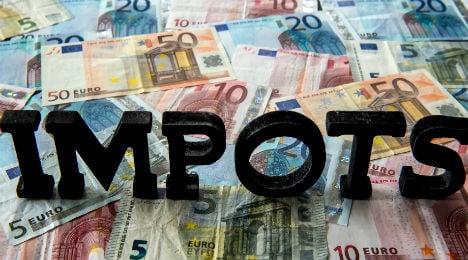 Are taxes behind a rise in number of wealthy French people heading abroad? Photo: AFP
Actor Gérard Depardieu may have been the most high profile wealthy Frenchman to take his fortune abroad, but he's not the only one.
Indeed French film director Luc Besson announced this week that in future he would be paying his taxes in California rather than France.
The leaving of the likes of Depardieu has helped fuel the image that any French person worth a bit of money was packing their suitcase to escape the country's tax man – who shot to global fame in 2012 when François Hollande vowed to introduce a 75 percent levy on millionaires.
And new figures published by financial newspaper Les Echos, which came from the Ministry of Finance at Bercy, will only give ammunition to those on the right who accused the Socialist government of driving  the wealthy abroad.
In 2013 the number of French tax payers earning over €100,000 a year leaving for abroad rose by 40 percent, Les Echos says, with 3,744 individuals heading for the departure gates.
That compares to 2,674 in 2012, the year Hollande was elected and 1,330 in 2010.
And for the very, very rich who earn over €300,000 each year, the number of nationals quitting France rose by 46 percent from 451 in 2012 to 659 in 2013
Les Echos notes that while the exodus of high earners rose by 40 and 46 percent, the increase in the overall number of French going abroad rose by six percent.
Another recent study on the migration flows of the world's richest people by New World Health also spelled bad news for France. Over the period of 200 to 2014 France was ranked third in the world for the number of millionaires (42,000) who left the country.
The main question being asked in the French press on Friday was whether Hollande's notorious election promise to introduce a 75 percent tax rate could be to blame.
But the figures show that recent rise in the trend of wealthy French heading abroad began in 2011, when Hollande's predecessor Nicolas Sarkozy was still in charge.
SEE ALSO: Crisis not taxes pushing French abroad
But are they all fleeing from the French tax man?
When trying to explain the rise in departures Les Obs news site suggests the Sarkozy's policy of demanding more from those earning over €250,000, as well as Hollande's 75 percent tax on millionaires, may have both played a role as the high 45 percent tax bracket.
But add a little perspective only 0.3 percent of French citizens who are subject to special wealth tax that kicks in on fortunes over €1.3 million, are exiled abroad.
But most studies suggest the French are simply heading abroad for professional rather than tax reasons and that goes for the country's most wealthy too.
Speaking to The Local previously, Fabienne Petit director of international activities at French firm Humanis, which works with French expatriates in the area of health cover and insurance, explained it was a myth about wealthy French fleeing the tax man.
“It’s a real cliché to say that all French people are going abroad for only fiscal reasons. In fact only 17 percent of people leave for financial reasons, so we need to put an end to this myth,” Petit told The Local.
Her view was backed up by a 2014 parliamentary report into French expats which stated that: “The fiscal motivation is rarely put forward as the first or most essential reason by those concerned”.
Nevertheless Les Echos notices that the number of French nationals departing for Portugal has tripled between 2010 and 2013, which is believed to be down to the Iberian country's fiscal advantages.
No figures were given for the number of wealthy French nationals returning home over the same time period, but from this year the French government intends to publish an annual report on all the comings and goings of its tax payers, which may shed more light on a phenomenon that continues to cause concern, given the loss of revenue to the French state.
SEE ALSO: French expats in no hurry to return home