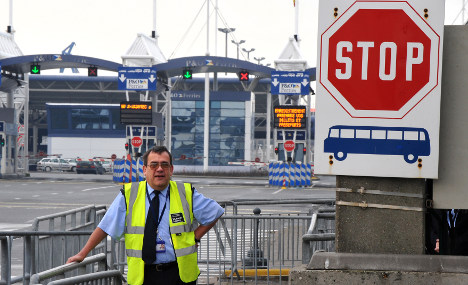 With French security forces and police struggling to repel repeated attempts by migrants to force their way into the Channel Tunnel, calls are growing in France for a longer term solution to be found that doesn't involve new barbed wire fences and more fierce guard dogs.

While in Britain, right wing politicians and press insist Paris should pull its finger out and use its police force to get a grip of the crisis, in France focus has shifted to the “totally one-sided” 2003 Le Touquet treaty.

That agreement effectively allowed Britain to move its border to the French side of the Channel. With border controls carried out on French soil it meant illegal immigrants could be barred from Britain without even making it there.

Although the agreement was reciprocal, there are not thousands of migrants trying to get from the UK to France, hence the feeling that France was hard done by.

Calls for France to scrap the treaty have been made by the outspoken mayor of besieged Calais, former ministers as well as by France’s national Commission for Human Rights.

“This tragic situation is largely the consequence of the signing of several bilateral treaties and arrangements between France and the UK,” said the commission in a recent statement.

That same point was made in an editorial in the left wing newspaper Le Monde as well as by the former minister Xavier Bertrand who provoked the wrath of sections of the British last week, saying: “The British border is at Dover, not on our shores.”

While many in France are now looking back at the 2003 treaty with incredulity that former Interior Minister Nicolas Sarkozy ever agreed to sign it, is the current government really intent on scrapping it, as some reports suggested? And can they? According to professor Pierre-Yves Monjal, a public law specialist from the University of Tours, France does have the legal power to say stop.

“France could use article 56 of the Vienna Convention by applying the general EU rules (on terminating a treaty). But first we must look at whether the two countries took the initiative of including a 'termination' (denunciation) clause, which is certainly the case.”

The last article of the treaty of Touquet grants the two signatory powers the option of ending the treaty “at any time”, simply by informing the other party in writing, via diplomatic channels. There would however be a two year delay before the change came into effect.

If President François Hollande’s under-pressure government chose to make what would be a hugely controversial move, “everything would depend on the executive”, says Monjal.

“Parliament could be consulted but it is not mandatory. It would simply be enough if France announced to the UK that it was no longer willing to apply Le Touquet treaty,” he told L’Express magazine.

That move would almost certainly provoke a diplomatic crisis as well as a legal wrangle as London would likely challenge the decision at a national and European level.

The Socialist government is unlikely to go down that route at a time when leaders of both countries have been hailing their cooperation – at least in public. A source at France interior minister told L’Express: “We do not consider this treaty is unchangeable, but what we are trying to do is negotiate with the UK to ensure the obligations our equally divided.

“We are proceeding step by step. It is not by creating a storm in the media that we will achieve it.”

The question of money also plays a part. In September last year London agreed to hand over an extra €15 million over three years to help deal with the crisis in Calais.

And last month Home Secretary Theresa May said another €7 million would be made available to increase security at the port and Eurostar terminal in Calais and only this week the UK said it was sending 100 extra border guards across the Channel.

If the French ever told the UK to move back its borders, there would still be an urgent security crisis in Calais, except the British would likely withdraw their financial help.

And the fear in France is that even more migrants would head to Calais if they thought it would be easier to get to Britain.

A recent statement from the British Home Office tried to play down the fuss from France around the controversial Touquet treaty.

It read: “The UK and the French governments have worked closely and collaboratively over many years to secure our common border and tackle international criminality.

“The Le Touquet treaty and the juxtaposed border control were jointly agreed between the French and UK governments and work in the best interests of both countries.”

Despite the growing opposition and anger in France it seems the British border police are in France for the foreseeable future.