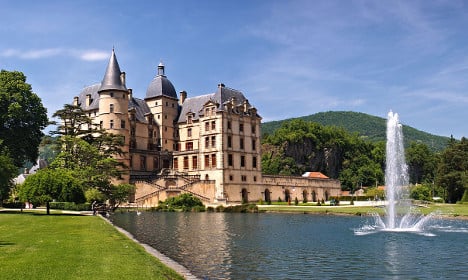 Have you heard of the Château de Vizille? Photo: WikiCommons
With the summer holidays in France come the tourists.
The Louvre museum in Paris alone attracted 9.1 million tourists last year, recent stats show. The Palace of Versailles had 7.6 million, and the Eiffel Tower had 6.7 million.
With these ridiculously large queues in mind, we’ve toured the country to find some hidden gems that are well worth seeking out this summer where you probably won't have to queue at all.
Neuf-Brisach, Alsace (Photo: WikiCommons)
This citadel, close to the German border in Alsace, is one of France's least-known Unesco World Heritage Sites. It was commissioned by Louis XIV in 1697 to bolster French defenses, and features red sandstone walls in the shape of an eight-pointed star.
Postman Cheval's Palais Idéal (Photo: Alexandre Piron/Flickr)
This is an odd one. The story goes that postman Ferdinand Cheval tripped over a stone in 1879 and then dreamt of his “ideal palace”. He spent the next 33 years building it with stones he collected on his journeys. The palace, which can be found south of Lyon in southern France, was finally classified as a historical monument in 1969.
Europe's biggest science museum (Photo: Guillaume Baviere/Flickr)
Did you know the biggest science museum in Europe is in Paris? La cité de la Sciences et de l'Industrie, which sits by the canal in the Parc de la Villette in the 19th arrondissement, was opened in 1986 and is rather a popular attraction for the Parisians. But, as with most attractions in Paris, it is all too often overlooked thanks to the allure of the Eiffel Tower, the Louvre, and everything else people associate with the City of Lights. Be sure to check out the planetarium, the cinema, and the huge greenhouse.
The Pont du Gard (Photo: Jane drumsara/Flickr)
This fascinating bridge in southern France is a Unesco Heritage Site and was build to allow the Nimes aqueduct to cross the Gard River. Unesco calls it a “technical as well as an artistic masterpiece” – and it's not hard to see why. The 50-metre high bridge, which spans three levels, was built by the Romans halfway through the 1st century AD.
Notre-Dame Cathedral… in Chartres (The northern entrance to the cathedral. Photo: Connie Ma/Flickr)
Why not head 80 kilometres out of Paris (in a south-westerly direction) and see a different and arguably better Notre-Dame cathedral than the tourist-overloaded one in the capital? The Chartres Cathedral is often cited as one of the best examples of French Gothic architecture, and is a Unesco World Heritage Site to boot.
The “Ancient Theatre of Orange” (Photo: Marcel Musil/Flickr)
It wouldn't be a list of must-see sites in France without choosing a Roman theatre – and we recommend the Théâtre antique d'Orange – which was built in the 1st century AD. Located in the town of Orange, southern France, this site has been a Unesco World Heritage site since 1981. In summer it plays host to the opera festival, the Chorégies d'Orange.
Chateau de Chenonceau (A closer look at the castle. Photo: Yvan  Lastes/WikiCommons.)
This castle, perched on top of the River Cher, is 500 years old a real pearl of the Loire Valley. It's a heritage listed site and protected by France's Ministry of Culture. If châteaux are your thing, this late Gothic and early Renaissance castle is for you.
The Louvre-Lens museum (Photo: Victorillen/Flickr)
A fan of art but want to be outside of Paris? Why not try the Louvre-Lens in northern France's Pas-de-Calais? This museum features a whole lot of works loaned out from the Louvre in Paris.
Château de Vizille (Photo: WikiCommons)
This estate is popular among French travellers – but you'd be forgiven if you'd never heard of it. Down in south-eastern France, the chateau is rather a splendid one indeed and boasts a 320 acre garden. Inside, be sure to check out the Musée de la Révolution française which focuses on the French revolution.
Rocamadour (Photo: Shutterstock)
Located in a gorge above a tributary of the River Dordogne, this entire village is an oft-overlooked gem in south-western France. The area marked a popular spot on the pilgrimage routes, and is well worth a visit today if you want to escape from the hustle and bustle of city life. And don't forget to taste their one-of-a-kind goat's cheese while you're there.