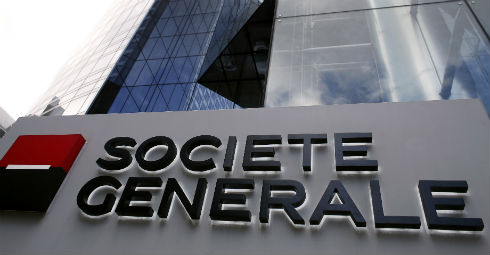 Net profit at the bank jumped by 25 percent for the April through June period from the same quarter last year to €1.35 billion, considerably higher than the average of €856 million expected by analysts surveyed by the financial news service FactSet.

The result includes a new provision of €200 million for litigation, taking the total to €1.3 billion.

Société Générale did not specify what the provision was for, but its French rival Credit Agricole saw its shares plummet 10 percent on Tuesday after increasing its provisions by €350 million as it was in advanced talks with US authorities for violating rules for dollar transactions with countries under US embargoes.

Société Générale has also been caught up in that US probe, which cost another of its French rivals, BNP Paribas, $8.9 billion last year to settle.

While the bank's second quarter earnings were boosted to the tune of €312 million due to a revaluation of its financial liabilities, it also saw improved performance in sectors including French retail banking and investment banking.

However its international retail banking and financial services unit saw its net profit slide by 6.6 percent to 312 million euros due to troubles in its Russian operations, which lost 45 million euros in the second quarter.

Soc Gen's Russian retail bank, Rosbank, posted a net loss of €61 million, which was half the amount lost in the first quarter of the year.

Despite Russia's continuing economic crisis, Societe Generale said loan issuance levels were normalising after having adopted a more selective approach and it had cut costs by eliminating 1,200 posts in the country during the second quarter.

Société Générale, which made 97 percent of the €870 million savings envisaged in a 2012 cost-cutting programme, unveiled new targets.

“Projects to simplify the organisational structure, improve efficiency, reinforce controls on externalised costs and review and simplify transactions with customers will enable the Group to generate 850 million euros in additional savings by 2017,” Soc Gen said in a statement.

The bank did not specify the impact on jobs of the cost-cutting plan, which aims to keep the bank competitive as regulatory costs rise.

“Mid-term, the Group is on track to achieve all the targets set,” he said in a statement.

“All the Group's businesses have posted earnings in line with or above the targets, with the exception of Russia where the situation is gradually normalising,” he added.

Investors welcomed the results, sending the bank's shares up 7.8 percent to €48.13 in early trading, while the Paris CAC 40 index was up 0.93 percent overall.