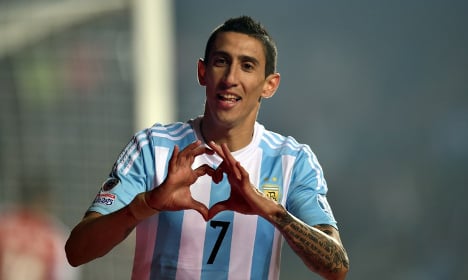 Can Angel Di Maria, PSG's latest recruit take the club to the promised land? Photo: AFP
“Paris Saint-Germain is delighted to announce the signing of Angel di Maria until June 30, 2019,” read a club statement.
Di Maria had already passed a medical in Qatar before flying to Paris on Wednesday after PSG agreed a fee of £44.3 million (€63m euros; $68.9m) with United. That makes Di Maria the second most expensive player in the history of

French football behind Uruguayan striker Edinson Cavani, who joined Paris from Napoli for 64 million euros in the summer of 2013.

“I am very proud, and can't wait, to wear the colours of Paris Saint-Germain. I want to win every competition we enter, both in France and Europe,” Di Maria, a Champions League winner with Real Madrid in 2014, was quoted as saying in the statement.

“I want to win the Champions League, which is a dream for all footballers, for a second time. We will do everything we can to bring Europe's biggest trophy to France and the fans of Paris Saint-Germain.”

The former Rosario Central, Benfica and Madrid star will be looking to recover his very best form after a disappointing season in the Premier League with United. After helping Argentina reach the final of the Copa America in Chile last month, Di Maria is behind in his pre-season preparations and will not play any part in PSG's Ligue 1 season opener at Lille on Friday.

He is the third major summer signing for Laurent Blanc's side after German goalkeeper Kevin Trapp joined from Eintracht Frankfurt for €9.5 million euros and midfielder Benjamin Stambouli penned a five-year deal after moving from Tottenham Hotspur for €9 million.

The arrival of Di Maria could be bad news for his compatriots Javier Pastore and Ezequiel Lavezzi and Brazilian winger Lucas, who all now risk being pushed down the pecking order at the Parc des Princes.