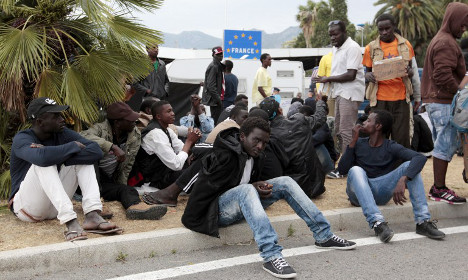 Migrants in the Italian own of Ventimiglia. Photo: AFP
The 35-year-old man from Nice was crossing the Italian-French border on Monday night when police pulled him over, Le Parisien newspaper reported.
A source told the paper that the driver had been hanging around Ventimiglia on the Italian side of the border, a small town where migrants stay while trying to get into France.
When officers pulled over the Frenchman's car – an Audi A4 station wagon – they found nine migrants from Pakistan and Afghanistan crammed in the back.
They were reportedly trying to make their way through France to Calais, where they no doubt planned to join the thousands of people trying to smuggle themselves to the UK. (The migrants were picked up in Ventimiglia, pictured above. Photo: GoogleMaps)
The driver of the car reportedly has a long criminal record, but this was the first time he was caught smuggling people.
He told police that he was simply working for “humanitarian purposes”. His passengers, however, claimed that he had told them he was a taxi driver and had charged them between €50 and €100.
The driver of the car was jailed in Nice, and risks a fine of up to €30,000 and up to five years in prison. The migrants, meanwhile, were taken back to the Italian side of the border.
People-smuggling has proved to be a money-earning option for some hard-up French people as migrants continue to flow through through the country on their way to northern Europe.
The Local reported in May how some business owners and even students in northern France have turned to the highly risky trade of trafficking migrants across the English Channel to the UK, just to make ends meet.
Some earn as much as €2,000 per person.