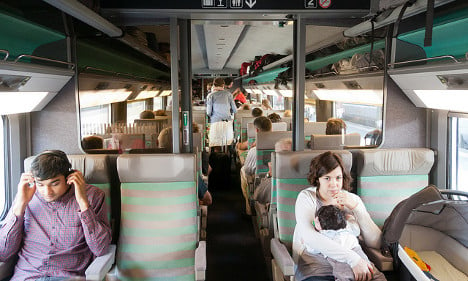 TGV passengers are known to keep to themselves. Photo: Eric Allix Rogers/Flickr
If you've ever been on a TGV train in France, you'd probably remember a silent trip, with your fellow passengers deep inside a book, a smartphone game, or listening to music on their headphones.
What you probably don't remember is striking up a conversation with your neighbour – but that doesn't mean they didn't want to.
Fresh survey results from rail operator SNCF found that 65 percent of passengers actually said they would be keen to be sociable with other passengers.
So what's holding these one hundred million annual TGV passengers from making new friends as they travel?
One third of passengers said while they'd be happy to get chatting, they simply didn't dare break the ice.
A further 50 percent said that while they'd like to be social, they were worried their neighbour wouldn't feel the same.
And they could be right. When the rail operator asked passengers to list the main two ways they liked to spend a long-distance TGV trip, 46 percent said it was a time to rest and 33 percent said it was “a time for themselves”. (Passengers in the TGV bar. Photo: AFP)
Some 21 percent found it a time of stress, while 20 percent said it was a time to “make discoveries or exchanges”.
The problem, it seems, is that all the people who want to talk are mixed in with the people who want to relax, meaning everyone feels compelled to remain silent.
A train community is a collective one, SNCF Voyages Managing Director Rachel Picard told Le Figaro newspaper.
“We've always organized things so passengers can take care of themselves, and this can encourage individualistic actions.”
But thing look set to change as a result of the survey, with SNCF now moving to help passengers “break the ice”, Picard said.
The rail operator announced on Tuesday that it would tackle the conflicting results by rolling out more services to accommodate for different kinds of passengers on the long haul lines.
The network already offers special areas specifically for kids for a small extra charge, as well as “calm zones” where phones must be on silent and conversations kept to a minimum. Both of these services are currently only available on select lines, but SNCF said that it would roll out these services to make them available on all TGVs “in the coming months”.
It's not the first time the rail operator has tried new ways to get people talking. In recent years, it has joined in the fun of France's Neighbour's Day festivities, encouraging passengers on the TGVs to bring some extra snacks for their “neighbour”, and offering free coffees when you've bought one for yourself in order to share with a passenger.
And besides the bar, festivities can also be found on special days like Valentine's or Christmas.