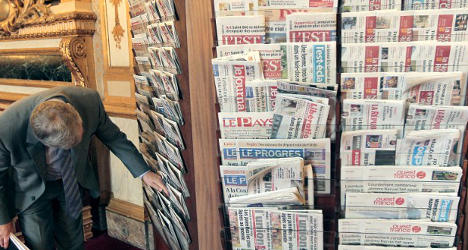 Le Dauphiné Libéré was one of 857 sites labelled as "worse than Hitler" by an Indian lawyer. File photo: AFP

Based in the Alpine city of Grenoble, Le Dauphiné Libéré has been producing local and regional news since 1945.

Set up by members of the French Resistance in the heady days of the post-war period it trumpeted itself as “the newspaper of liberty for free men”. (A screengrab of ledauphine.com taken on Tuesday)

According to leaked documents seen by Le Monde, the domain name ledauphine.com was — along with sites such as hindisex.com — one of 857 sites on the conservative Indian government's hit list.

Those sites — labelled as “worse than Hitler, than Aids, or cancer” by the lawyer pushing the censorship initiative —were blocked to users by the Indian government on the weekend despite the Supreme Court rejecting the move.

However, the editors of the Le Dauphiné Libéré may be able to take some comfort from the fact that their appearance on the list of blocked sites has wrested credibility from the Indian government as it attempts to tackle pornography and claim the country's moral high ground.

Meanwhile, people took to social media to express their discontent, with critics pointing out the country should be doing more to fight rape and sexual assault, rather than banning online pornography.

Le Dauphiné Libéré initially published an article saying its website had been blocked by Indian authorities but this had been removed by Tuesday afternoon.