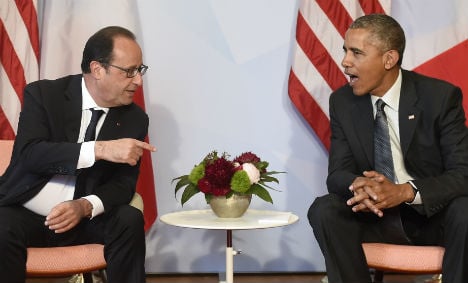 President François Hollande has saluted the courage of Barack Obama for taking on the fight against climate change. Photo: AFP

French President Francois Hollande on Tuesday welcomed a US plan to cut carbon emissions as a “major contribution” to an
upcoming global climate conference in Paris.

His US counterpart Barack Obama unveiled plans on Monday to force power plant owners to cut emissions of carbon dioxide — the most common greenhouse gas that contributes to climate change — for the first time ever.

“This plan is a key step in the decarbonisation of the US economy,” Hollande said in a statement, hailing the “courage” of Obama in finalising the project.

“It is a major contribution to the success of the Paris conference on climate change.”

Obama said power plant owners must cut carbon dioxide emissions by 32 percent from 2005 levels by 2030 — a move already welcomed by the European Union but criticised by Republicans.

“Climate change is no longer about protecting the world for our children and grandchildren, it is about the reality that we are living with right now,” said Obama in a speech announcing the plan.

Paris will host the UN climate conference at the end of the year, where organisers hope to conclude an agreement capping global warming at two degrees Celsius (3.6 degrees Fahrenheit) over pre-industrial levels.