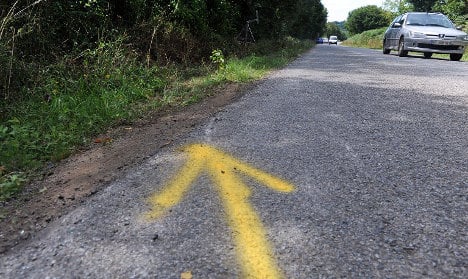 An arrow painted on the road by the police indicates the direction of the road accident. Photo: AFP
The shocking news made national headlines in France at the weekend, after the van crashed into a ditch on the side of the wrong side of the road near the town of Rohan, in north-western Brittany.
Four minors were killed and a further ten were injured, including the driver. All four people killed in the accident were aged from 15 to 17.
The group of youngsters was reportedly on the way to a private party when the van crashed, at about 1.30am on Sunday.
The van was a Citroen Berlingo — which is designed to seat only seven, but had 14 passengers at the time of the accident. (The van crashed into this ditch near the town of Rohan. Photo: AFP)
On Monday afternoon, the Europe 1 channel revealed that the driver had been drinking before the accident and that he did not have a driving license.
It remains unknown exactly what his blood/alcohol content was, but prosecutors are also asking whether drugs were involved.
The channel reported that the vehicle belonged to the father of the boy who was behind the wheel.
The driver was still in shock on Monday afternoon, and was yet to speak with police officers.
Url copied to clipboard!