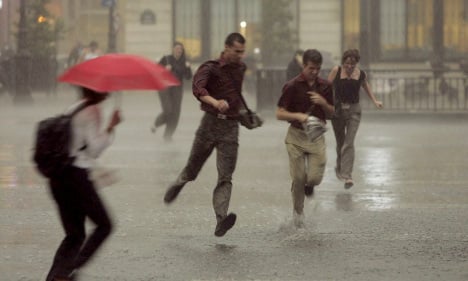 The heavy weather is expected to roll in at 7pm, not abating until 6pm on Tuesday. File photo: AFP

While most of France will enjoy stable, summery conditions on Monday, the country's south-western corner is set for storms.

The départements of Gironde, Landes and Pyrénées Atlantiques have all been put on orange alert, meaning dangerous meteorological conditions are forecast according to Météo France.

People in the region can expect heavy downpours, or even hail, and winds of up to 100km/h, France's official agency warned.

The heavy weather is expected to roll in at 7pm, not abating until 6pm on Tuesday.

Météo France have warned people not to take shelter under trees and to avoid parks, forests and mountain areas until the storms pass.

The wet weather will no doubt come as a welcome relief to the area – particularly the Gironde region, which has been plagued by extensive forest fire in recent weeks.

A fire to the west of Bordeaux torched over 600 hectares of land and burned for days before firefighters were able to get it under control.