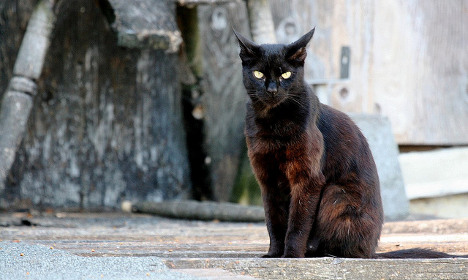 Black cats are being killed in the Marseille housing unit. Photo: nwartist/Flickr
Over the last two months, seven black cats have stopped showing up for their daily meals at a Marseille housing block.
Some have been found with signs they were killed in a horrific manner while others have just vanished. One was found cut in half, some crushed, and the tail of one was found in a feeding bowl.
“Now I'm always apprehensive when I'm giving food to the cats,” Marie-José Canetti, pictured below, told Le Parisien newspaper.
“It makes me feel sick to the stomach.”

She said she had no idea who among the hundreds of residents was responsible for what the paper dubbed “a massacre” – but she had her suspicions.
“Perhaps its a person who doesn't like animals and thinks there are too many cats. Or it could be a very superstitious person.”
As in many other countries around the world, black cats are considered by some in France to bring bad luck.
Canetti has since filed a police report over the apparent black cat serial killer.
The sheer gruesomeness of the attacks, coupled with the fact that the killings have occurred in what is usually a peaceful neighbourhood, has seen the local mayor chiming in over the weekend.
“If there is a raging psychopath out there, everything must be done to stop them and keep them out of harm's way,” he told Le Parisien.