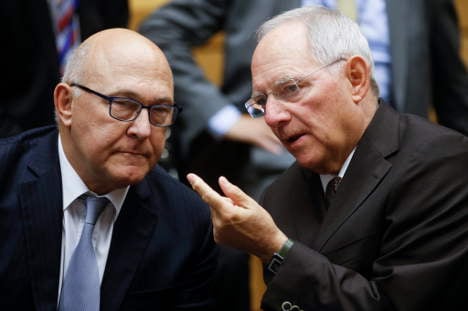 “I think Mr Schäuble is wrong and even contradicting his own deep European commitment,” the French minister said in the interview to be published Monday in the German business daily Handelsblatt, excerpts of which were broadcast Sunday.

“This wish, which I share, consists of reinforcing the eurozone,” a goal which would preclude any such temporary exit, Sapin said,

To talk now of a 'Grexit,' a Greek withdrawal from the common European currency, as Schäuble did during talks in Brussels in mid-July, is “not realistic,” he insisted, while recognising that his German counterpart was not speaking tactically but “with conviction”.

Last month, eurozone finance ministers included an option for a temporary Greek exit from the euro if Athens failed to agree a bailout deal, according to a document obtained by AFP.

The potential “time-out” mentioned in the eurozone draft did not refer to a specific time period.

The Greek government later said it wants to see a final deal on its international bailout hammered out by August 20,

On the possibility of a Greek exit “there is disagreement, a clear disagreement,” said Sapin in his Handelsblatt comments.

“If you allow (a country) to leave temporarily that signifies that all the other countries in difficulty are going to want to get out of trouble by a readjustment of the currency,” Sapin said.

“You don't overcome difficulties by manipulating the exchange rate but by structural reforms which reinforce competitiveness and lead to efforts at budget balancing,” he added.

After lengthy negotiations, Greece and its creditors signed a general agreement on July 13 on a third bailout plan but tough talks remain on how to reduce Greece's debt burden.