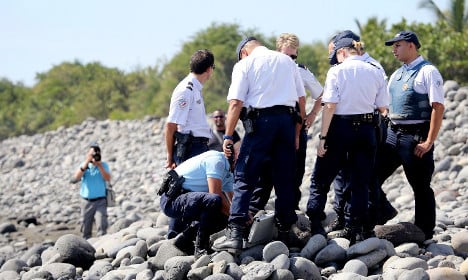 Officials come the waterside in Réunion looking for more clues. Photo: AFP
The Malaysian team arrived at the Palais de Justice in Paris shortly before midday to meet with a French judge, a group of experts and police charged with the investigation.
They were due to release a statement after the meeting.
It comes after a fevered hunt for more possible wreckage on La Reunion island turned up no new clues on Sunday, with authorities saying that metallic debris found by locals did not come from an aircraft.
The flaperon is being examined in a military laboratory in the southwestern French city of Toulouse that specialises in plane crash investigations, with results expected from Wednesday afternoon.
The conclusion should determine if it is a piece of the Boeing 777 Malaysia Airlines Flight 370 which disappeared mysteriously March 8, 2014 with 239 people on board — and possibly provide some clues to one of aviation's greatest mysteries.
Malaysian officials have confirmed it is part of a Boeing 777, making it virtually certain to be part of the missing plane as MH370 is the only Boeing 777 to be lost at sea. An aerial view of the Reunion beach where the part was found. Photo: Richard Bouhet
'Treasure hunt' mentality
US aircraft manufacturer Boeing will also dispatch a “technical” team to participate in the investigations in Toulouse.
The flaperon will be analysed using physical and chemical methods including “a scanning electron microscope that can magnify up to 100,000 times” to understand how it was damaged, said Pierre Bascary, former director of the tests at France's General Directorate for Armament.
But beyond the flight identification, analyses are unlikely to draw the story of the disaster, experts say.
“We should not expect miracles from this analysis,” said former BEA director Jean-Paul Troadec.
Meanwhile, locals on La Reunion island have been combing the shores since the wing part was found last Wednesday, handing over bits of what they believe to be wreckage to police.
“There is a sort of 'treasure hunt' mentality that is taking hold and people are calling us for everything,” said a local source close to the
investigation.
On Sunday, several pieces of debris sparked excitement, one of which was believed by locals to be from a plane door.
However investigators quickly shot down hopes.
Malaysia's Azharuddin told AFP from France that the item resembling a plane door “was actually from a domestic ladder. It is not a door”.
Police on the Indian Ocean island also collected Sunday a mangled piece of metal inscribed with two Chinese characters and attached to what appears to be a leather-covered handle.
Chinese Internet users suggested it may be a kettle.
“People are more vigilant. They are going to think any metallic object they find on the beach is from flight MH370, but there are objects all along the coast, the ocean continually throws them up,” said Jean-Yves Sambimanan, spokesman for the town of Saint-Andre where the wing debris was found.
He said islanders were also dumbfounded that after cursory helicopter flights the day after the wing part was found, no official search of the
coastline is under way.
“If it comes from a plane it would be a pity if I didn't take it” to police, said Luc Igounet, 62, who found the metal bar that turned out to be
from a ladder. (Officials transport the debris from the beach. Photo: AFP)
'We need closure'
The flight's mysterious disappearance, which saw it vanish off radars as a key transponder appeared to have been shut off, has baffled aviation experts and grieving families and given rise to a myriad conspiracy theories.
Speculation over the cause of the plane's disappearance has focused primarily on a possible mechanical or structural failure, a hijacking or
terror plot, or rogue pilot action.
Malaysian Transport Minister Liow Tiong Lai said civil aviation authorities were reaching out to their counterparts in other Indian Ocean territories to be on the lookout for further debris that could provide “more clues to the
missing aircraft.”
He also confirmed that the wing part had been “officially identified” as from a Boeing 777.
Scientists say it is plausible that ocean currents carried a piece of the wreckage as far as La Reunion.
However Roland Triadec, a local oceanographer, said La Reunion represented only “a pinhead” in the Indian Ocean and the likelihood of other debris washing up there was low.
Authorities have warned that even if the debris is confirmed to come from MH370, the mystery of what happened to the plane and where exactly it went down are still likely to persist unless the black box is found.
Australian search authorities leading the hunt for the aircraft some 4,000 kilometres (2,500 miles) from La Reunion are confident the main debris field is in the current search area.
For the families of the victims, the discovery of the part has been yet another painful twist on an emotional rollercoaster.
“It has been hurting for so long. We need the closure and all the evidence possible so that we can go ahead with our lives,” said Nur Laila Ngah, the wife of the flight's chief steward Wan Swaid Wan Ismail.