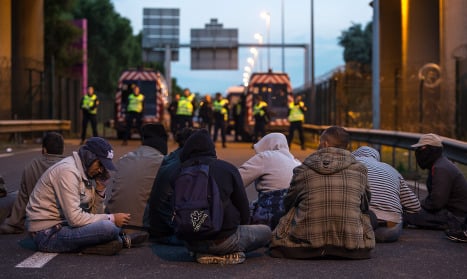 French gendarmes stand facing a group of seated migrants as they block their way in the Eurotunnel site in Coquelles near Calais. Photo: Philippe Huguen/AFP

The joint statement came as a French opposition lawmaker accused British Prime Minister David Cameron of failing to grasp “the severity of the problem”, and said migrants should not be stopped from going to England unless stronger measures were taken.

Hundreds of migrants have tried to make it into the undersea tunnel in recent weeks in the hopes of finding a way onto a train or lorry headed for Britain. At least 10 migrants have died attempting the dangerous journey since June.

Earlier this week, the British government pledged 10 million euros ($11 million) to improve fencing around the Eurotunnel rail terminal in Coquelles, outside Calais.

And Cameron, who has warned that the crisis could last all summer, promised “more fencing, more resources, more sniffer dog teams” to aid French police in their nightly cat-and-mouse game with the migrants.

The new measures sent “a clear message”, according to French interior minister Bernard Cazeneuve and his British counterpart Theresa May in a statement published in France's Journal Du Dimanche and in Britain's Telegraph newspaper.

“Our border is secure, and there is no easy way into the UK,” they wrote. They said the world was facing “a global migration crisis” that required a European and international response, and warned that the burden of tackling the problem should not lie with Britain and France alone.

“Many of those in Calais and attempting to cross the Channel have made their way there through Italy, Greece or other countries,” the pair wrote.

Ultimately, the crisis had to be addressed at the roots by “reducing the number of migrants who are crossing into Europe from Africa” for economic reasons.

“Our streets are not paved with gold,” they said, adding that both governments were currently sending back around 200 migrants a month who do not qualify for asylum.

“Tackling this situation is the top priority for the UK and French governments. We are committed and determined to solve this, and to solve it together,” Cazeneuve and May said.

“If he continues not to propose anything else, let's let the migrants leave and let Mr Cameron handle his politics in his own way, but on his own island,” Bertrand, a former employment minister, told the Journal Du Dimanche.

The crisis has become a hot political issue on both sides of the Channel, and dominated the front pages of Britain's Sunday newspapers.

Divided public opinion on the issue of immigration sparked small rival protests on Saturday in the British port town of Folkestone, at the mouth of the Channel Tunnel, with those welcoming migrants in one camp and far-right wingers opposed to their presence in the other.

“We are here to make it clear to the migrants that many people here would welcome them and that the way they are being treated is not in our name,” said Bridget Chapman, organiser of the pro-migrant demo.

But nearby right-wingers chanted: “Britain first, taking our country back.”

“We are a small overcrowded island. We haven't got enough space for our own people, let alone a torrent of mass immigration into this country.”

French police said Saturday around 300 migrants in Calais attempted to reach Britain via the Channel Tunnel overnight, a significant drop from previous nights after security in Calais was beefed up.

On Thursday night, French authorities faced more than 1,000 attempts by migrants camped out in the port of Calais to reach the undersea tunnel.

That number was already significantly down on the more than 2,000 daily attempts by migrants to breach the defences recorded earlier in the week.

France this week sent 120 additional police officers to the northern port city to stem the crisis.

A spokesman for Eurotunnel, operator of the trains that link Britain and France through the tunnel, said there was “much less disruption” at its terminal near Calais since the reinforcements arrived to bolster a 300-strong existing police contingent.

A police source told AFP that, while the reinforcements had helped, “the pressure of the migrants was still there”.

Around 3,000 people from Africa, the Middle East and Asia are currently camped in Calais waiting to cross into Britain illegally by clambering onto lorries and trains.