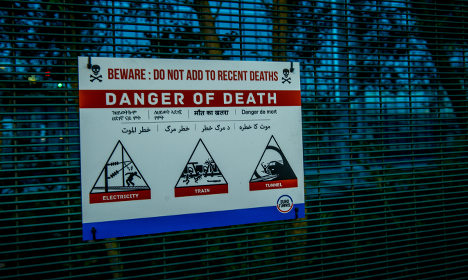 Overnight Thursday French authorities faced more than 1,000 attempts by migrants camped out in the port of Calais to reach the Channel tunnel overnight.

France has sent 120 additional police officers to the northern port city to stem the crisis, as the number of deaths since June reached 10.

A spokesman for Eurotunnel has said there was “much less disruption” since the reinforcements arrived to bolster the 300-strong police contingent already stationed in the city.

At least four coaches of riot police were guarding the entrance to the tunnel on Friday.

The situation appears to have calmed in recent days, after migrants made more than 2,000 daily attempts to breach the defences earlier in the week.

Late Friday the first attempts under cover of the gathering darkness began at around 9:00 pm (1900 GMT) when a group managed to access the embarkment lanes before being chased off by police.

At around 2:00 am Saturday some 150 migrants were escorted back towards Calais.

In such cases the vast majority seeking to get over to Britain will just hide away again and await another chance to sneak over.

One man died in the early hours of Wednesday, apparently crushed by a lorry as he tried to make it into the tunnel.

“I didn't make it into the station this time… It was very difficult, there was much more security than on previous days,” said 20-year-old Reza from Afghanistan, rubbing his eyes after a short night's sleep as he stepped out of his tent.

“We didn't have a chance last night. There were too many policemen, even more than before,” said Baby, 27, from Eritrea, who has been in camping out in Calais for more than two years.

A police source said that, while the reinforcements had helped, “the pressure of the migrants is still there” and the “situation remains difficult to deal with”.

However, this source said there had been far fewer migrants managing to enter the Eurotunnel platforms and get on the train shuttles going to England.

During the night, an AFP journalist saw people descend onto the railways close to the Eurotunnel site only to be halted by police.

At least a dozen made it past the cordon, but ran straight into a second line of officers waiting a hundred metres (yards) further down the line.

Around 3,000 people from countries including Syria and Eritrea are waiting in Calais as they try to cross into Britain illegally by clambering on board lorries and trains.

Adding to the Calais difficulties, hundreds of French sailors blocked the city on Friday, using burning tyres to prevent access to the port in the midst of the peak holiday travel period.

The roughly 300 workers from French company Scop SeaFrance are protesting against plans to sell off some of their ferries to rival Danish firm DFDS, a move expected to result in hundreds of job losses.

Jean-Marc Puissesseau, president of the port of Calais, on Friday branded the latest action “the straw that broke the camel's back”, and accused authorities of “abandoning” the port.

The crisis has become a hot political issue on both sides of the Channel and British Prime Minister David Cameron and French President Francois Hollande discussed the issue by phone.

“They both expressed concern about the immediate security challenges and reiterated their commitment to continue working closely together to tackle the problems posed by illegal migration,” a statement from Cameron's office said.

Cameron promised “more fencing, more resources, more sniffer dog teams” to aid French police after holding a meeting of his government's COBRA emergency committee on Friday on the crisis, which he warned could last all summer.

Critics dismissed the measures as inadequate, with the chief executive of the Road Haulage Association Richard Burnett describing fences and dogs as “just sticking plasters”.

Cameron has also come under fire for controversial comments on the crisis that has dominated British media all week, with furious truck drivers blocked
on the English side of the channel.

Speaking on a visit to Vietnam, Cameron referred to a “swarm of people” wanting to come to his country to seek better lives and find employment.

The prime minister's comments earned him criticism from acting opposition Labour Party leader Harriet Harman, who said Cameron should “remember he is
talking about people, not insects”.

The Refugee Council, a leading British charity which works with asylum seekers, said it was “awful, dehumanising language from a world leader”.

Cameron also said that defence ministry land would be used to park trucks waiting to cross to Calais.