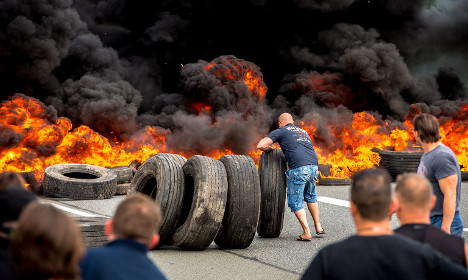 Striking employees of the My Ferry Link company block the access to the port of Calais. Photo: AFP

The roughly 300 workers from French company Scop SeaFrance are protesting against plans to sell off some of their ferries to rival Danish firm DFDS, a move expected to result in hundreds of job losses. The action earlier in the month also sparked cancellations on the Eurostar passenger train service between France and Britain.

Calais is also the scene of a nightly cat-and-mouse game between police and hundreds of migrants trying to get into Britain via the undersea Channel Tunnel that links the two countries. The ferry route from Dover in England to Calais is one of the busiest in Europe, with British holidaymakers using it to get to the Continent by car.

On the French side of the channel, however, an official at the national information road centre (CNIR) said that she wasn’t too worried about additional disruptions to traffic on Saturday, when millions of French take off on their annual August break.

“By tomorrow, there should be no problem related to what’s happening in the port right now and we expect the traffic to be as normal as you can expect for a ‘Black Saturday’,” she told The Local. Motorway to Eurotunnel deserted due to My Ferry Link fire. Expect delays. https://t.co/SBC9ekTwzb